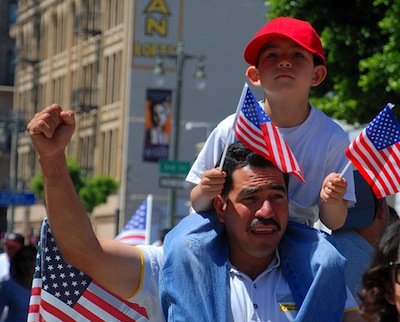 While Long Island’s Emily Ruiz has been attracting national attention since she was detained by U.S. Customs and Border Protection, a related story in Detroit is much less known. It also involves the use of children to capture undocumented immigrants.

Agents from U.S. Immigration and Customs Enforcement (ICE) followed immigrant parents to their children’s school on March 31, and then swept in with six vehicles to make arrests.

According to the Detroit Free Press:

A federal agency said Thursday that its immigration agents in Detroit appear to have violated policies when they targeted a school last week where immigrant parents were dropping off and picking up their children.

In a statement, the national director of public affairs said that agents in Detroit may have violated rules.

“ICE is concerned by reports about the manner in which this operation was conducted and is conducting an internal review of the facts surrounding it,” said ICE Director of Public Affairs Brian Hale.

“Elements of the operation appear to have been inconsistent with policy and our standards and priorities.”

ICE officers “are required to follow a policy that prohibits operations near schools unless approved by headquarters or otherwise based on exigent circumstances,” Hale added. “It is not clear that this policy was appropriately followed in this matter. In addition, one of the targets may not have been within the agency’s stated enforcement priorities.”

In an interview with NPR, Antonio Ginatta, advocacy director for the US Program at Human Rights Watch said that in the Emily Ruiz case and other cases there is a concern that children not be used as bait for the arrest of undocumented parents.