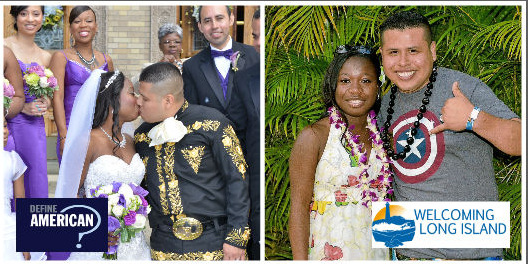 Define American is a national media and culture campaign that uses the power of story to elevate our conversations about how we engage as citizens. To start, the conversation is about the immigrant experience. Welcoming Long Island’s Define American series provides an array of amazing, inspiring stories that we want you to share with others—and inspire you to share your own stories with us!

Every culture has its own unique wedding traditions. America is no exception. But sometimes what makes American weddings unique is the way the couple incorporates their native cultures’ traditions into them.

That’s what made me excited to attend the wedding of Jesus and Nadesha Muniz at Chateau Briand in Carle Place this past May. I had known the couple for quite some time. Jesus is Mexican and Nadesha is Jamaican, so I knew that they came from very different backgrounds with unique cultural norms.

But it was as a guest at their wedding, which beautifully blended traditions from Mexico, Jamaica, and the U.S. to create an experience as unique as they are, that truly challenged the way I defined American—and which was the original inspiration for this series.

Even upon arriving at the church I was amazed. Outside, a mariachi band was playing.  I have a fascination with mariachi bands and “banda” music, which is distinct from music I’ve experienced from Ecuador and Guatemala, where my parents are from. It is a custom in Mexico to hire this live entertainment at special occasions such as anniversaries, quinceañera (sweet 15) celebrations, and weddings.

The bride looked beautiful coming down the aisle in a traditional American-style white wedding dress. The groom, much to my surprise, entered the church not in a tuxedo, but wearing a vestuario de charro—a traditional mariachi suit like those worn by the band outside.

Jesus later explained to me, “The mariachi suit has a traditional symbolic meaning in my family. I wanted to continue the tradition of wearing the suit like my father and grandfather did before me. It was made in Mexico actually, with gold designs; the color gold symbolizes fortune to me.”

In tribute to Nadesha’s Jamaican roots, a steel pan player chimed away during the cocktail hour, which also featured both a Mexican and Jamaican buffet station.

Their first dance included three songs. The first was “From This Moment On” by American country singer Shania Twain. The second song was Kumbia Kings’ “Na, Na, Na (Dulce Niña),” which is popular in Mexico and is influenced by the Tex-Mex music styling made famous by the late Selena Quintanilla. Jesus chose this song because he would listen to it when he was waiting to meet the woman he would marry someday.

The third was a remix to Pitbull’s “Shake Señora” featuring Sean Paul. They saw this as symbolic of the day. Sean Paul is from Jamaica and Pitbull is Cuban, and the track seamlessly blends two the cultures into one song.

Despite the bride and groom’s cultural differences, there are similarities to their families’ immigration stories. Both their parents came to the U.S. looking for better economic opportunities. Both have fathers who worked in construction, but placed heavy emphasis on the importance of education.

However, there are certain cultural challenges that Jesus and Nadesha have faced as a couple. Despite both being fluent in English, they sometimes still struggle to communicate. “There are times Nadesha needs to explain things to me more than once to understand, and our take on things will differ a lot,” Jesus said.

Food preferences tend to be very different between Nadesha and Jesus, but they are beginning to understand and accept each other’s tastes.  Jesus, like many people from Mexico and Central America, was raised to eat tortillas with most meals. When they moved to their apartment together, Jesus brought his comal—a flat pan used to warm tortillas. Nadesha, however, prefers to serve rice with every meal. In line with Jamaican tradition, the rice is usually served with a meat dish and stew.

The one tradition where they find the most compromise is the celebration of Christmas. “Mexicans celebrate Christmas Eve rather than Christmas Day,” Jesus said. “I grew up in a household where you will wait until 12 in the morning to open up presents. The Jamaican culture celebrates Christmas Day… Our kids in the future will be exposed to these two traditions.”

They’ve also established their own traditions, such attending a Broadway play every year in November or December.

Speaking of children, Jesus said, “I think my children will most likely see themselves as American. We would like them to speak two languages, to have the opportunity to visit Mexico and Jamaica, and to eat dishes from both places as well, and we hope they will appreciate being from a family that celebrates both cultures.”

Congratulations again to Nadesha and Jesus, and thanks for inspiring our Welcoming Long Island Define American series!