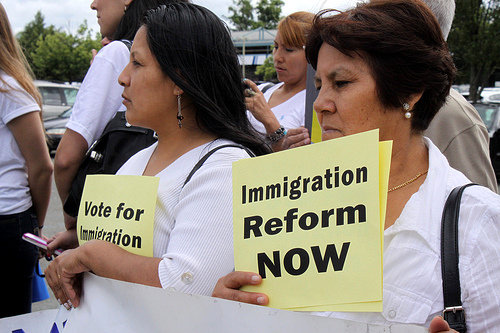 Last month, immigrant rights supporters on Long Island launched a campaign to educate the public about Secure Communities, a federal immigration enforcement program that requires local law enforcement to share fingerprints of any arrestee with Homeland Security, and to hold those suspected of an immigration violation for 48 hours so that they can be taken into federal custody.

The campaign is certainly relevant here on Long Island: More people have been deported through Secure Communities in Nassau and Suffolk than in any other part of the state, according to the New York Civil Liberties Union. But Long Island isn’t the only area pushing back against the program.

Yesterday, the city council in Washington, DC, passed a bill aimed at lessening the impact of S-Comm, as the program is also called. The most important provision: City jails will only be mandated to hold people who are older than 18 and convicted of a violent crime, and the city will bill the federal government for the cost of any detentions.

Elise Foley and Cristina Costantini of The Huffington Post report:

The D.C. measure specifically targets one of ICE’s tactics called immigration detainers—a practice in which ICE asks local law enforcement to hold an individual for up to 48 hours, so that the agency can investigate their immigration status and assume custody if necessary. The newly-approved law restricts the period in which immigrants will be held from 48 to 24 hours, requires that ICE pay the local costs of incarceration and specifies that those held on detainers must have been convicted of serious crimes.

While ICE spokeswoman Danielle Bennett declined to comment on the D.C. measure or how it would affect her agency’s ability to operate in the area, she wrote in an email that, “ICE remains committed to working with our law enforcement partners to help make our communities safer by focusing our resources on public safety and national security threats, border security, and the integrity of the immigration system.”

In recent years, numerous cities and states, including Washington, DC, and New York State, have attempted to opt out of the program, but the federal government has said the program doesn’t need the approval of municipalities. The bill in DC could provide a model of resistance for places like Long Island, according to Nadia Marin-Molina, worker rights program coordinator at the National Day Laborer Organizing Network.

“Here in Long Island, we could take some very similar language and it could be used on a local or county level, and try to do the same thing.” Marin-Molina says. “I don’t see why not.”

Even with the bill in DC, the city is still required to share fingerprints of any arrestee with the federal government. But this type of legislation is a way for communities to help restore trust in police, according to Marin Molina. “At least it addresses the key issues, that people are getting held and being turned over to ICE even if they haven’t been convicted.”

For a copy of the bill approved by the DC city council, click here.