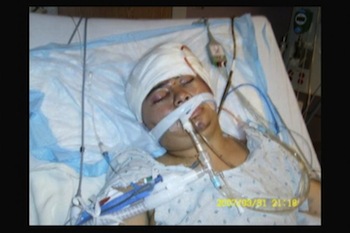 Two days after beginning deliberations, a federal jury convicted two of three Pennsylvania police officers on charges related to covering up the killing of a Mexican immigrant.

Matthew Nestor, Jason Hayes, and William Moyer, all police officers in Shenandoah, Pennsylvania, were accused of aiding a group of white teenagers after they brutally assaulted Luis Ramirez in July 2008.

The New York Times reports on the verdict:

The Times goes on to describe how the officers impacted the investigation and trial of Ramirez’s killers:

Latinos said that the main defendants in the death — Brandon Piekarsky, a member of a high school football team, and his friend, Derrick Donchak — got off with light sentences of misdemeanors in a state trial in 2009. Federal prosecutors later pressed civil rights charges, and in October, got convictions, with possible life sentences.

Prosecutors said the officers misrepresented facts during their investigation because they had personal connections to the families of the accused. Mr. Nestor had vacationed with Mr. Piekarsky’s mother, according to the indictment; Mr. Hayes was dating her.

As for the specifics about the convictions, The Philadelphia Inquirer has more info: