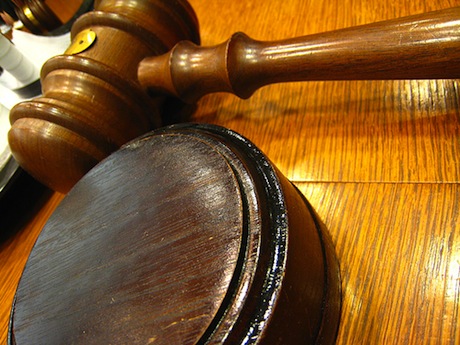 Christopher Slavin was convicted of the 2000 attempted murder of Israel Perez and Magdaleno Estrada, two Farmingville day laborers. Slavin and Ryan Wagner took the two immigrants to an empty warehouse in Shirley where they tried to beat Perez and Estrada to death.

At his trial, the judge ordered Slavin to show jurors his Nazi tattoos. The tattoos included one of a Jew pleading for his life in front of a Nazi.

Slavin has appealed his conviction, charging that being forced to show his tattoos violated his Fifth Amendment right not to testify against himself. Slavin’s argument did not go over well with judges on the federal appeals court, where it was offered yesterday.

But judges on the U.S. Court of Appeals for the Second Circuit in Manhattan seemed skeptical. “If your client had written out his plan…on a piece of paper and put it in his pocket, that could have been seized by the police,” Judge Barrington Parker told [Slavin’s attorney Robert] Del Col.

“This is not like where a person is compelled to make a statement,” said Judge John Walker Jr. “He got the tattoos himself.”

Walker cited a recent case he helped decide, in which the court said police could act on information they notice in a tattoo. “The voluntary tattooing of an incriminating word to arm was, like the voluntary preparation of documents, not the product of government compulsion,” that decision said.

“The Fifth Amendment only says you cannot be a witness against yourself,” Blakey said. “It doesn’t put off-limits every prior communication…The Fifth Amendment does not guarantee him a right to keep his shirt on and conceal the tattoos, the content of which is already known to the government.”