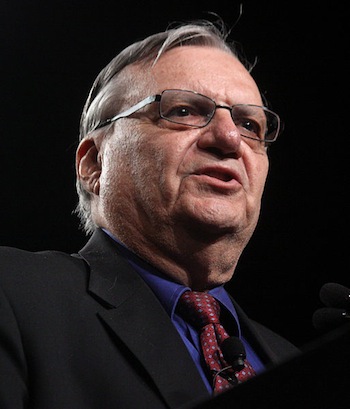 Joe Arpaio, the sheriff of Arizona’s Maricopa County, is currently on trial in a federal class-action lawsuit, accused of sanctioning racial profiling and discriminatory policing. In nearly two decades as sheriff, he’s made headlines for large-scale immigration sweeps focusing on Latino neighborhoods, and for actively working to degrade prisoners and detainees, including those who haven’t committed any crime beyond their immigration status.

In a 2007 appearance on CNN’s Lou Dobbs Tonight, Arpaio spoke glowingly about his critics comparing him to the Ku Klux Klan, saying, “I think it’s an honor” because “it means we’re doing something.”

At trial last week, Arpaio recanted, saying he doesn’t consider the comparison an honor and that he has no use for the KKK. But his past statements aren’t dissipating so easily.

With the trial in the backdrop, Bright Eyes singer-songwriter Conor Oberst is using those 2007 comments to anchor a critique of the sheriff in a new song, “MariKKKopa.”

Oberst spoke with Kia Makarechi of The Huffington Post about the song, which he penned for his side band, Desaparecidos:

At what point did you feel as though going after Sheriff Joe by name was important? Is there a danger you’re just giving him more attention?

Joe Arpaio needs no help from me getting attention. For years he has been a beacon of bigotry and intolerance for all the world to see. The list of human and civil-rights abuses he’s committed in Maricopa County is long and well documented. His many “crime suppression sweeps” are some of the most egregious affronts to American values and human dignity perpetrated in this century. What he does need is to be called out at every opportunity as the criminal that he is. There are many ways of doing that. The federal government’s current law suit against him being one of them. I used the best means at my disposal to do it: a punk rock song.

As someone who grew up in a non-border state, why do you think this particular issue strikes you as so important and inspiring?

Well, first I would say that there are undocumented people living all across this country. There are a great many living in Nebraska; the vast majority of whom make vital contributions to our economy, society and culture. They are without a doubt a net positive to our American way of life. I have many friends who are both Mexican and Mexican-American and others who, I guess you would say, are somewhere in between. The ironic thing is that all three of those categories often exist inside of the same family. I’ve seen with my own eyes how our unjust immigration system tears these families apart, separating mothers and fathers from their children and leaving all involved in a state of helplessness and despair. I’ll never understand how destroying families through deportation benefits our society. How we treat the undocumented says a great deal about us as a people and whether or not we’ll continue to fulfill the fundamental American promise of equality and opportunity for all. Considering our history, I can think of nothing more American than an immigrant.