All articles in The Immigrants’ Civil War may be found at the bottom of the page.

In March 1862, after the Confederate army had captured parts of New Mexico and Arizona, the governor sent by the Confederate president to rule wrote a command to his subordinates. The command told what his policy would be towards some of the non-white populations of the Southwest.

Governor John Baylor’s soldiers had been skirmishing with Native Americans as they had advanced. Now some of those nations wanted to meet with the Confederates to arrange a peace treaty. Baylor wrote to his military subordinate about the meeting:

“You will use all means to persuade the Apaches or any tribe to come for the purpose of making peace…and when you get them together kill all the grown Indians and take the children prisoners and sell them to defray the expense.”  He demanded that his soldiers “allow no Indian to escape.” Baylor told his underling that the Confederacy had a policy of “extermination” of “these cursed pests.”1

When on March 10 the main Confederate army in the territory occupied Santa Fe, the territorial capital and a Latino cultural center, it accomplished a two decades-old Texas dream of conquering New Mexico. The Confederates’ movement had been so slowed by harassment by Nuevo Mexicano cavalry, however, that they allowed the few dozen Union troops in the city to evacuate or destroy most supplies. One Confederate colonel complained of the “numerous parties of Mexicans in the employ of the enemy rendering it dangerous” for the Texans to even send messages between commanders.

The Union commander, Col. Edward Canby, mistrusted the Nuevomexicanos militia as soldiers in conventional warfare. Instead, he used them as irregulars. Canby wrote that they were sent north to “impede the operations of the enemy, obstruct his movements…, and cut off his supplies.” Slowed by the militia, the Texans had given a 900 man Union army of miners time to walk from Colorado to New Mexico, the Unionists covering 400 mountainous miles in 13 days.2

After the fall of Santa Fe many of the Nuevomexicano Union militia in the northern part of the territory became fed up with the war and went home. A small number of Nuevomexicano volunteers moved to Fort Union where they met up with the Coloradans and regular army troops. One of these men would play a crucial role in the outcome of the campaign.3 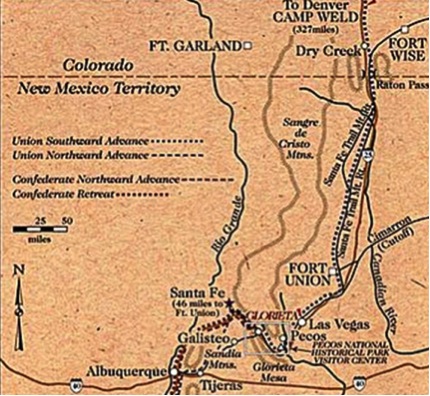 While Confederate troops were marching north to capture Santa Fe, 900 Union volunteers were beginning a long walk through the Rocky Mountains to Fort Union. When the Confederates heard of the arrival of the Unionists, they sent most of their army to try to destroy the Coloradans at Glorieta.

The Confederates decided they had to crush the Union force at Fort Union before it could link up with the main Union army at Fort Craig on the Rio Grande. The inexperienced Colorado commander led his men out of Fort Union to try and attack the large Confederate army in a narrow canyon in the mountains called Glorieta Pass. On March 28, the two armies met in battle and the outnumbered Union troops were beaten after a day of bloody fighting.4

While the Confederates had apparently triumphed, they were still forced to retreat after the battle. 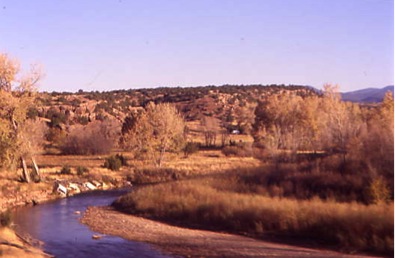 The Pecos River near the Glorieta Pass. (Source)

As the main fight was raging, a small Union detachment was being guided through the mountains around the Confederate army by Lieutenant Colonel Manuel Chavez of the New Mexico Volunteers. The mostly-Coloradan force launched a surprise attack on the Confederate supply train and destroyed it. When the Coloradans’ path back to Fort Union was blocked after their successful raid, a Spanish-speaking Polish immigrant, who had been a priest and was still popularly known among local people as the “Polish Padre,” showed them a hidden path to safety. “Padre” Alexander Grzelachowski had emerged from the darkness on a white horse and he guided them back to the Union lines.5

The Confederates returned to their camp to celebrate their victory but they found they were without food or ammunition. Rather than starve in the mountains, they retreated to Santa Fe. With this, the conquest of New Mexico began to unravel and the Confederate empire of the Southwest started to collapse.6

Resource
The Civil War Trust has a map of the battle on its website.

Appendix
This year’s commemoration of the 150th Anniversary of the battle includes reenactors wearing the uniforms of the New Mexico Volunteers and drilling in Spanish.

Sources
1. Blood and Treasure: Confederate Empire in the Southwest by Donald Frazier, Texas A&M University Press (1995) pp. 196-197. Baylor claimed that his exterminationist policy was ordered by the Confederate government in Richmond, but the government denied his claim and he was reprimanded.

5. Blood and Treasure: Confederate Empire in the Southwest by Donald Frazier, Texas A&M University Press (1995) p. 226; The Battle of Glorieta Pass: A Gettysburg in the West by Thomas Edrington and John Taylor pub. by University of new Mexico Press (1998) pp. 90-100.

6. The Battle of Glorieta Pass: A Gettysburg in the West by Thomas Edrington and John Taylor, University of New Mexico Press (1998) pp. 101-121.