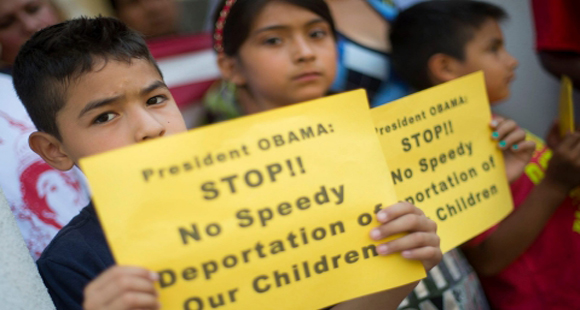 Thousands of vulnerable mothers and children from Central America are still coming to the United States for refuge but once again the Obama administration has failed to come up with a humanitarian solution and instead the message from the government appears to be, ‘we are sending you back.’

Even though the government has recognized recent increases in the migration of refugee families from El Salvador, Honduras and Guatemala as a humanitarian crisis, it has not been able to create programs of protection either in the U.S. or in those affected countries.

The government is continuing to focus on treating this as a border security issue and has taken measures to prevent refugees from getting close to the southern border and to prevent them from getting legal assistance once they are here by holding families in detention centers the moment they arrive.

There has been a recent announcement of a second wave of raids scheduled for June. Although the government has said that they are focusing on the detention of women and children from Central America who have final orders of removal and who have had a chance to request protection in court, it seems that this is not consistently the case, explained Michelle Brané, Director of the Migrant Rights and Justice Program with the Women’s Refugee Commission, in a press conference last week.

“According to government statistics,” Brané said, “only about 30% of the women who have arrived here with children are represented at any point throughout their proceedings and under 50% of the unaccompanied children have had representation.”

“In the last round of raids conducted by the administration in January, very few cases have had the opportunity to reach and speak to attorneys before their final removal,” she said. “Representation makes an enormous difference in the success rate of a protection claim. Somebody who is represented is 14 times more likely to win their claim than somebody who does not have representation.”

In 2014, an unprecedented number of mothers and children from El Salvador, Guatemala and Honduras were detained at the U.S.-Mexico border on their way to the U.S. This year, there is a new increase of this population who are seeking refuge here.

“We have seen a dramatic shift in the demographics of who has been coming over and why,” Brané said. “It has been very clear that the arrival of this particular population contains a significantly high percentage of people who are seeking protection.”

And they are still coming despite of the risks. The U.S. has been sending a message campaign in Central America that has been heard loud and clear, saying that risks of migration to the U.S. have never been higher and that chances of success have never been lower, according to Jonathan Hiskey, Associate Professor of Political Science at Vanderbilt University, in Tennessee. Research based on a survey by Vanderbilt University Latin American Public Opinion Project concluded that the U.S. efforts to send a message about the dangers of crossing the border has resonated in those countries, Hiskey explained.

But knowing the risks have no impact on their decision to migrate. Rather, their desire to come to the U.S. “is whether or not that person has been victimized multiple times in previous years,” Hiskey said. “The push factors of crime and violence are far more important in explaining Central American migration rates than the U.S. deterrence campaign.”

Those Central American migrants who get to the U.S. border are more likely to qualify as refugees rather than economic migrants. Berné explained that it is not illegal to request protection or asylum at the border and it is in fact a right guaranteed by both international and domestic U.S. law. And in fact, according to Berné, even though the administration is detaining the majority of families, 80% of them are passing “credible fear interviews” conducted by homeland security officers.

The U.S. needs a protection program that works for those Central American families that are seeking asylum. For them, leaving their country is a decision between life and death and coming to the United States by crossing the border seems to be the fastest way these desperate families have to protect themselves.

“Our kids applicants have been raped, have been kidnapped and even been killed while waiting for their cases to be processed. Many of the kids just abandon their claims and leave. Only 100 kids have arrived through this program,” said Joanne Kelsey, Assistant Director for Advocacy at theLutheran Immigration and Refugee Services.

Kelsey is referring to the Central American Minor (CAM) Program, which was first announced in 2014. This is an opportunity for parents who have children in the Northern Triangle to bring them to the U.S. as refugees. But the program has been a real disappointment since it has not been operationalized and no one person has actually benefited from it, according to Kelsey.