The week after the Confederate attack on Fort Sumter in mid-April 1861,Carl Schurz insisted on meeting with Abraham Lincoln. The two had known each other since the famous Lincoln-Douglas debates several years before and Schurz had become Lincoln’s political apostle to German voters during the 1860 presidential campaign. Now Schurz wanted to make sure that Lincoln mobilized all his resources for the Civil War, including the non-English speaking immigrants.

Schurz believed that German communities throughout the North would rally to the flag in the crisis after Fort Sumter was attacked, but he knew that many were reluctant to join army units commanded by the native born. The 1850s had been a period of rampant anti-immigrant propaganda and action by the nativist Know Nothings. Some of these anti-immigrant activists would soon be appointed to high levels of command in the Union Army. One, Nathanial Banks, would eventually command an entire army. Germans, particularly those with poor English skills, feared being mocked for their difficulties with the language and they anticipated being discriminated against by nativist commanders. 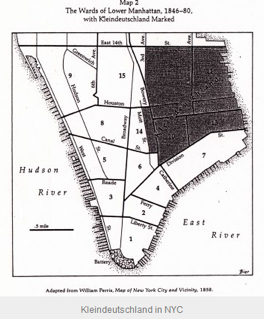 Carl Schurz would recruit many of the soldiers for his three German regiments in Kleindeutschland, an area now called the Lower East Side. This was the densest German immigrant community in the United States and would remain so for nearly half a century. By the 1880s, New York was said to be the third largest German-speaking city in the world, after only Berlin and Vienna.

Schurz wanted to allay these fears by creating military units in which German soldiers would be placed under German officers, and in which the language of command would be German. This would allow whole communities of Germans from packed immigrant communities in New York, Cincinnati, Chicago, and St. Louis, to enlist together and maintain communal mutual support. Schurz and other immigrant leaders believed this would spur enlistment of immigrants and take away the frictions that a history of discrimination against the foreign born might have exacerbated.1

Carl Schurz also saw this plan as a way to ensure that all Americans knew of the contribution German immigrants were making to the war effort. Individual Germans enlisting in units dominated by the native born would be invisible to the mass of Americans, but German units under German commanders would make the blood sacrifice of the immigrants for the Union manifest to everyone. The Schurz plan would have the added advantage of insuring that positions as officers were available to the foreign born. 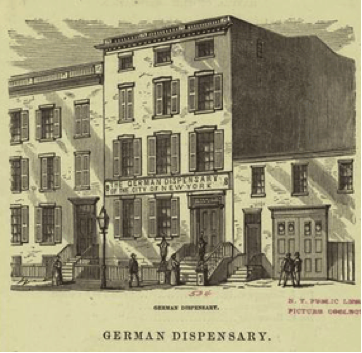 New York had the largest German immigrant population in the United States. The community was centered on the Lower East Side, called Little Germany or Kleindeutschland. The area had many ethnic institutions, including the bilingual German Dispensary for the treatment of sick immigrants and their children. Two decades after the war, a new Dispensary was built on the Lower East Side, which is undergoing restoration. The German Dispensary would later move north to 77th Street along with the German community’s move to Yorkville. The Dispensary is now called Lenox Hill Hospital.

Schurz was canny enough to understand that wartime service would pave the road for future German-American politicians, who would need to attract constituencies beyond the German neighborhoods. Today’s generals and colonels would be the senators, representatives, and governors of the coming decades. If this form of what we would today call “affirmative action” were not available, German political leaders would be left behind and their communities would suffer.

Schurz presented his plan to Lincoln and his staff.

The president’s secretary, John Hay, was taken by the still-young revolutionary’s charisma. Hay described Schurz in his diary during the month of the secession crisis as a “wonderful man,” saying that he was “an orator, a soldier, a philosopher, an exiled patriot, a skilled musician. He has every quality of romance.” Hay hoped he would be given a military command, joking that Schurz would make a “wonderful land pirate” because he was “bold, quick, brilliant, and reckless.”2 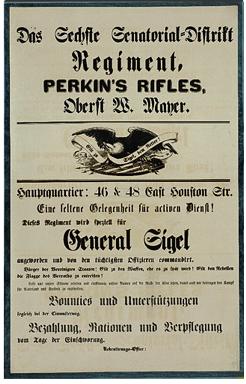 Two hundred thousand German immigrants would serve in the Union Army during the Civil War. They were recruited using German-language posters and often served in German-language units. (Credit: Civil War Treasures from the New-York Historical Society)

Schurz was commissioned by Lincoln to raise a German unit. He traveled to Philadelphia and New York and managed to organize three German regiments in just one month’s time. The officers of his German Brigade asked him to be made their brigadier general, but Lincoln had other plans.

Over Schurz’s objections, the president appointed the German revolutionary to be the American Minister to the Court of Queen Isabella II, the Spanish monarch. The international radical would soon be outfitted in the aristocratic raiment of a 19th century diplomat.3