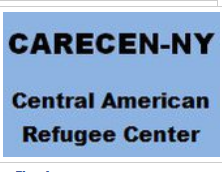 The Central American Refugee Center (CARECEN) has announced the names of its 2012 honorees. The honorees will receive awards at CARECEN’s Annual Dinner on November 15, 2012 at 6:30 pm. Those to receive awards are:
Amol N. Sinha, Esq., the Director of the Suffolk Chapter of the New York Civil Liberties Union; Community Organizer Osman Canales of La Fuente; Charlene Obernauer Executive Director of L.I. Jobs with Justice; and prominent immigration lawyer Stephen Herman, Esq.