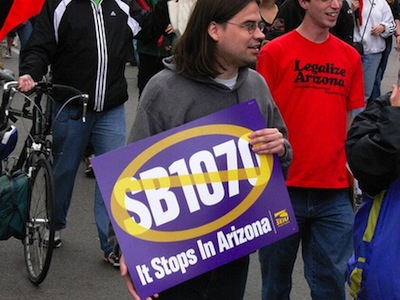 In Brentwood last night, I taught a civics class offered by CARECEN, the organization where I serve as program director. In the class, which is for immigrants who will soon be taking the citizenship test, we talked about today’s oral argument at the Supreme Court on the constitutionality of Arizona’s “Show me Your Papers” law, SB 1070.

I explained that the lower courts have already ruled that the law violates the constitutional mandate that immigration laws are a power reserved to the federal government. I also told them that while the Supreme Court is supposed to interpret the laws based on the Constitution as well as their own precedents—which are squarely against SB 1070— politics can intrude. We can’t be sure what outcome we’ll get.

The 20 students, from El Salvador, Guatemala, Honduras, the Dominican Republic, and Colombia, were very concerned that if SB 1070 is allowed to stand, other states will pass similar laws.

Last week we had studied the Civil War, and students noted that some states that were the most anti-immigrant, like Georgia, Alabama, and South Carolina, had been slave states at the start of the war. They worried that places with histories of bad race relations would target immigrants with SB 1070 clones.

The students also wondered if, even though they will soon be US citizens, they themselves would be hassled, or even arrested, in states with “Show Me Your Papers” laws.

If they are subjected to discrimination, are they really Americans on an equal basis with white citizens?