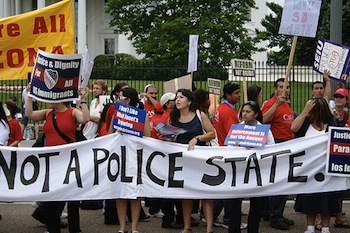 Sixty heads of major corporations doing business in Arizona have asked that the Arizona State Senate stop introducing anti-immigrant bills, motivated by worry that the bills are divisive within the state and are giving Arizona a bad name worldwide.

The state Senate is looking at a reckless, costly and counterproductive package of immigration bills.

Senate President Russell Pearce said, in a meeting with the Editorial Board, that he saw no downside to last year’s misguided Senate Bill 1070.

Sixty top Arizona executives know the reality. In a virtually unprecedented move, they sent a joint letter to Pearce urging him not to pass any more immigration bills.

These are the leaders who cross the economic spectrum in Arizona, from health care and development to tourism and automotive. Their company names are familiar: US Airways, PetSmart, Sunbelt Holdings, Intel Corp.

They include The Arizona Republic.

They can point to the cancellations, the missed opportunities and the lost jobs.

They know how much Arizona, a state that depends so much on tourism, feels the bite of controversial legislation that clouds our reputation.

And now the Senate is deciding whether to give Arizona another self-inflicted bad eye.

Imagine the spectacle of mass protests as Arizona hosts Major League Baseball’s All-Star Game for the first time in July.

Arizona is getting a global brand, and it’s not the Grand Canyon State, but the place that is hostile to Hispanics and immigrants. The latest package of bills is profoundly divisive in a state with a Hispanic population of 30 percent – and growing.