Last week a very old former dictator was convicted of committing some very serious crimes against humanity a very long time ago. Guatemalan strong man Gen. Efrain Ríos Montt was sentenced to eighty years in jail for his role in the Guatemalan genocide of the 1980s. This is a genocide that most Americans have never heard of, even though it took place closer to the U.S. border than any other genocide of the second half of the 20th Century and it directly impacted our immigration policy.

The Guatemalan civil war involved the killing, primarily by the Guatemalan government, of a quarter of a million people. Many of the victims were members of indigenous groups that Americans know collectively as the Mayans. A particular focus of Ríos Montt was the Ixil Indians. Here is how the New York Times described the verdict:

“We are completely convinced of the intent to destroy the Ixil ethnic group,” Judge Barrios said as she read the hourlong summary of the ruling by the three-judge panel. Over five weeks, the tribunal heard more than 100 witnesses, including psychologists, military experts and Maya Ixil Indian survivors who told how General Ríos Montt’s soldiers had killed their families and wiped out their villages.

Ríos Montt is the first head of state ever convicted of genocide in his own country. 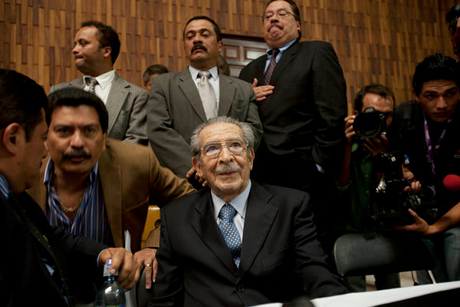 Efraín Ríos Montt was sentenced to 80 years in prison.

One reason the slaughter in Guatemala is largely unknown here is that the United States helped arm the military that carried it out. Another is that when refugees fleeing the genocide arrived here during the Reagan years, they were rounded up and deported to the killing fields of Guatemala. More than 99% of asylum applications from Guatemala were denied during the 1980s.

I had the privilege of working with a team of dedicated lawyers that stopped the rubber stamp deportations of Guatemalan refugees in 1991 but even I had had my doubts that the day of justice for the murderers would never come. Now we need to follow the brave people of Guatemala and face up to our government’s own role in this crime.