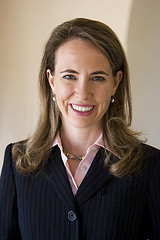 Democratic Arizona Congresswoman Gabrielle Giffords was one of 18 people shot by a gunman outside a Tucson supermarket on Saturday. At the time of the attack, Giffords had been meeting with constituents as part of a “Congress on Your Corner” event.

The 40-year-old recently reelected legislator was described as being in very critical condition after a shot was fired at her head, with the bullet traveling through her brain. Still, medical staff the University Medical Center in Tucson displayed hope for her survival.

“I can tell you at this time, I am very optimistic about her recovery,” Dr. Rhee said in a news conference. “We cannot tell what kind of recovery but I’m as optimistic as it can get in this kind of situation.”

Throughout the day, details of the shooting have been revised, including reports on the death toll. From the Times:

An official with the Pima County Sheriff’s Department said that six people had been killed, including a child about 9 years old and John M. Roll, the chief judge for the United States District Court for the District of Arizona.

President Obama said in a news conference that at least five had died, including the child and Judge Roll. The Sheriff’s Department said that a total of 18 were wounded, with the hospital confirming that 10 had been taken there.

Police have confirmed that they have a 22-year-old suspect in custody, and sources have identified the suspect as Jared Loughner.

Photos and videos from the alleged suspect have been circulating on the Internet, culled from what appear to be the suspect’s MySpace andYouTube pages.

The YouTube videos express an ethereal, possibly anti-government sentiment, and one of the photos from the alleged suspect’s MySpace account (now deleted, but screenshots are posted here) shows a gun sitting on top of a history book. 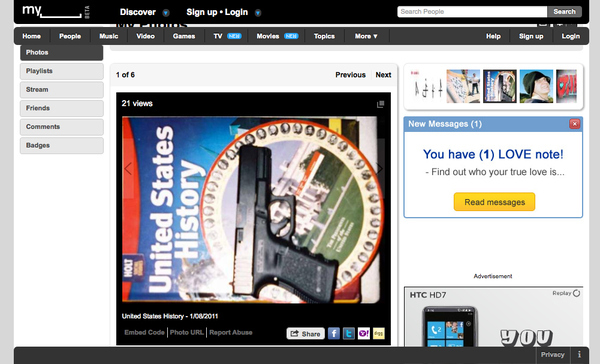 Giffords was one of the politicians referenced on a controversial map issued in March by former Alaska Governor Sarah Palin. On the map, elected officials who had voted for the health care reform bill hadcrosshairs targeting their states, with the message, “It’s Time To Take a Stand.” 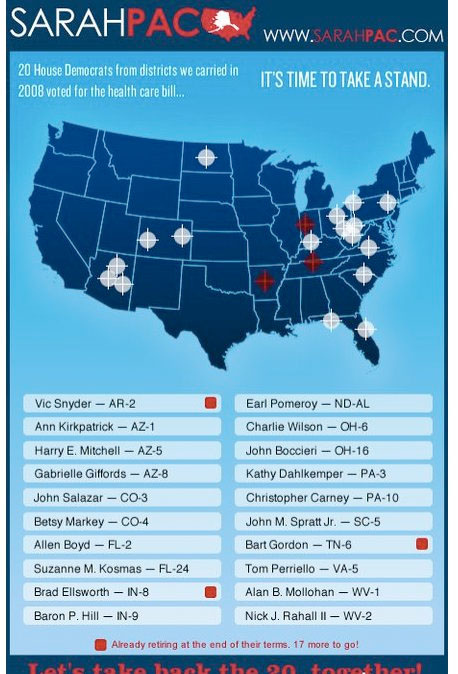 In the past year, Giffords stirred opposition in Arizona by opposing the immigration law SB 1070 and supporting the health care reform bill, and Saturday’s attack wasn’t the first time that she had faced violence or threats while in office.

Last March, after the final approval of the Democrats’ health care law, which Ms. Giffords supported, the windows of her office in Tucson were broken or shot out in an act of vandalism. Similar acts were reported by other members of Congress, and several arrests were made, including that of a man who had threatened to kill Senator Patty Murray, Democrat of Washington.

And in August 2009, when there were demonstrations against the health care measure across the nation, a protester who showed up to meet Ms. Giffords at a supermarket event similar to Saturday’s was removed by the police when the pistol he had holstered under his armpit fell and bounced on the floor.