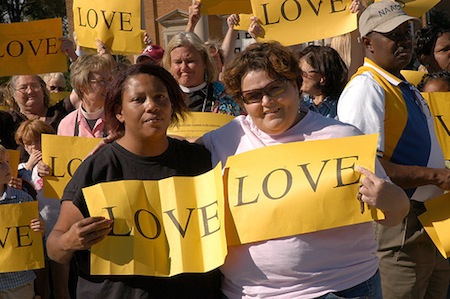 Immigrant supporters at a 2007 rally in Athens, Alabama.

I’ve been following the degeneration of the immigration debate in Alabama lately.

That state is proud to have passed the worst anti-immigrant law in the country. Local politicians have been deploying lies and violent rhetoric against immigrants there.

One even spoke of conservatives firing all the bullets in their guns to halt illegal immigration. He later described that as a metaphor.

Now Alabama Congressman Mo Brooks has weighed in with this contribution:

They have no right to be here. They are clogging up our emergency rooms and making our education system more expensive. As your congressman on the House floor, I’ll do anything short of shooting them…

Brooks is a tea party freshman, and he seems to have no qualms about employing the militant rhetoric of that faction. These are the sort of words that could well lead younger men to violence against immigrants.

While he added that he would only engage in conduct within the parameters of the law, others may not.

Here is a simple request for politicians from Alabama:

Please don’t talk about shooting immigrants, even if you mean to set the limits of your hatred.