We have unfortunately become used to right-wing leaders attacking people based on their race, religion, and ethnicity. We have endured claims that Mexicans are criminals and rapists, that the U.S.-born children of immigrants are not real Americans, and that Muslims cannot be president.

The conservative provocateur, Ann Coulter, upped the ante when she denounced the “f__cking Jews” on Twitter. She changed the focus of her attacks to Catholics and immigrants last week to honor the visit of Pope Francis to the United States.

On September 23, Coulter tweeted in response to Pope Francis’ call to embrace the poor and marginalized that “this is why our founders (not “immigrants”!) distrusted Catholics & wouldn’t make them citizens.” This single sentence is wrong on so many levels.

Let us begin with Coulter’s lie that the Founding Fathers “wouldn’t make” Catholics citizens. In fact the Founders of the United States did exactly the opposite. They drafted a Constitution that not only did not bar Catholics from citizenship, but which prohibited “religious tests” for those seeking government office. Nearly every European country required that anyone seeking government office be the same religion as the monarch. The Founding Fathers said that such “religious tests” were opposed to our republican form of government. They also protected the rights of Catholics and members of all other religions to worship freely.

Coulter might think that the Founders were religious bigots like herself, but the evidence from their own documents contradicts this claim.

Coulter’s other claim that the Founders were “not immigrants” is based on pure ignorance. The Founders included many immigrants within their ranks. If you read the rest of this article, you will know infinitely more about the Founders than Ann Coulter does. 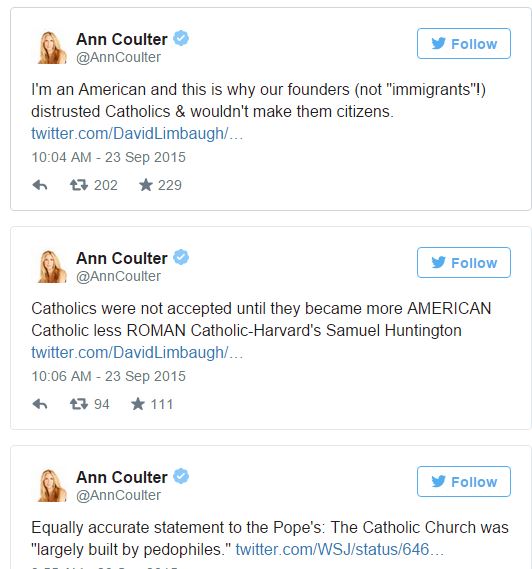 When George Washington chose the first Justices of the Supreme Court to interpret the Constitution, three of his choices were immigrants. James Wilson of Scotland, James Iredell of England, and William Patterson from Ireland made up the immigrant third of the original of the Supreme Court.

Four of the first six Secretaries of the Treasury were immigrants, one each from Switzerland and Scotland, and two from the West Indies. President Washington appointed an Irish immigrant, James McHenry, as Secretary of War in 1796. McHenry would give his name to Fort McHenry, the subject of the Star Spangled Banner.

Immigrants did not have to rely on Presidential appointment to hold important offices. Of the 81 Congressmen in the first Congress, eight were immigrants.

Immigrants were among the most important writers of the Founding Generation, crafting American ideas of democracy and freedom. The most famous writer of them all, Tom Paine, came from England. John Crèvecœur, a French immigrant, was among the first to explore the American Dream.

When civil liberties were threatened during John Adams’ administration, the Irish-born editor of the Philadelphia Aurora, William Duane, risked arrest to take on the president and his Alien and Sedition Acts. Vermont Congressman Matthew Lyon, also an Irish immigrant, was jailed under the Alien and Sedition Acts and he became the only Congressman to be reelected while in jail.

When Americans say that this country was “built by immigrants,” they rarely realize that, from the very beginning, America’s system of government depended on those who came here from somewhere else.

Ann Coulter and other immigrant haters need to learn the history of the country they claim to love.