Since Alabama’s anti-immigrant law (H.B.-56) went into effect two months ago, law enforcement in Alabama has targeted non-whites for investigation and arrest based on race and prejudice. The very first arrest in the state under the new law is illustrative. When the first person arrested turned out to be from Yemen, the legislators who passed the bill put out a press release tying the detained man to terrorism. The police soon had to release him. He was not a terrorist, and he was not even an undocumented immigrant. But the police and politicians can be forgiven for their mistake. He was non-white and he spoke with an accent, enough to raise suspicions in Alabama.

In recent weeks, monitors report that police have set up checkpoints in Latino neighborhoods where documents of residents are checked. Anyone without proof of legal status is arrested and held for hours or even days until relatives bring immigration papers. In some cases, people legally in the United States have presented proof, but local police, ignorant of the wide variety of immigration documents, have arrested them anyway. 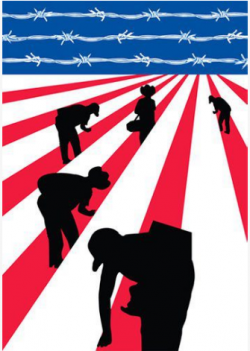 The police are not the only part of the legal system trampling the legal rights of immigrants. Judges, elected by local Alabamans, have been as bad as the cops. For example, one judge told his court that if a defendant needed a court interpreter, that was evidence that he was in the country illegally. Another said that anyone without a drivers license could be arrested as an undocumented immigrant.

Even law enforcement officials who are not racists are erecting a wall between the police and immigrants.

Some police departments, which use the modern community policing model of developing partnerships with local Latinos, say that their efforts are in danger. Even though they may disagree with the new law, they still have enforce it. A provision of the law allows anti-immigrant activists to sue departments that are not zealous in arresting immigrants.