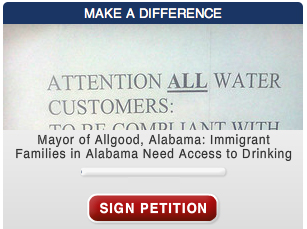 A law targeting immigrants in Alabama could lead to a humanitarian crisis in the state since a provision in the legislation forbids the government from entering into contractual relations with people who can’t prove their legal status. That means that without proper identification, families could be denied basic services, like access to water.

Some municipal water companies have begun demanding immigration documentation for new hook-ups, and a few companies have said they will stop service to current customers who are undocumented. The law, HB 56, provides for the jailing of officials who give contractual services to undocumented immigrants, so even well-meaning bureaucrats are scared that they will face time in prison if they don’t discriminate.

If water was only needed for drinking, Alabama’s immigrants might get by on Poland Spring. But, of course, it is used for so much more. Washing your hands after using the bathroom is no longer possible, but not to worry, there is no water in the toilet anyway. Dishes lie in dry sinks and laundry goes uncleaned.

The law also makes it a felony for an undocumented immigrant to attempt to contract for a government service, making immigrants afraid to seek basic sanitation services like garbage pick-up and sewer hook-ups. Municipal electric companies are similarly suspect, leading to confusion over whether paying for these everyday services is now a crime.

This provision of the law threatens the health not only of immigrants and their children; it also looms threateningly over the state’s public health. Parts of modern Alabama may soon resemble 19th century America, where preventable diseases that were easily controlled with water and soap decimated communities.

The crisis goes beyond health and safety.

Most Alabama counties have now barred United States citizens and others from marrying undocumented immigrants. This is because the issuance of a marriage license is a possible violation of the new law because it involves the payment of a fee.

Since the leading manner in which people legalize their status is through relative petitions filed by spouses, Alabama is basically cutting off its undocumented residents from ever getting their green cards.

A state that banned interracial marriages when I was a boy is now banning marriages between people with different immigration statuses.