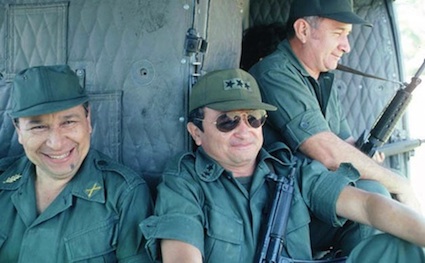 US officials will charge Casanova with torture (center, in the 1980s).

The Obama administration is moving ahead with an effort to strip former Salvadoran General Carlos Eugenio Vides Casanova of his permanent residence and deport him to El Salvador.

During the early 1980s, Vides Casanova was the head of the Salvadoran National Guard, which was a small army maintained to suppress dissent in that country. The National Guard’s human rights record was so horrendous that it was disbanded at the insistence of the United Nations.

Vides Casanova was in control of the National Guard during the worst years of the repression in El Salvador. Troops under his command raped and murdered four American women, three Catholic nuns and a Catholic lay worker, who were assisting refugees. After the war, the UN formed the Commission on the Truth for El Salvador, which found that Vides Casanova knew who had murdered the women, and that he participated in the cover-up of the killings. He later became the Salvadoran defense minister.

Today, Vides Casanova will be charged in immigration court with participating in torture during the 1980s, an offense that makes him deportable.

Torture victims will likely testify against him, including one who says he was personally interrogated by Vides Casanova. While lawyers for the general do not concede that he tortured anyone, they claim that his actions were supported by American officials and they point out that no US official has been tried for human rights abuses in El Salvador.