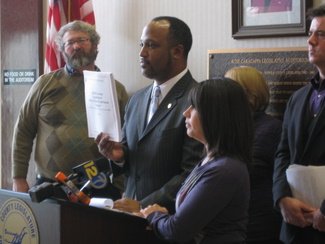 At a press conference on Tuesday, a Suffolk County government official was accused of inappropriately meddling with a hate crime report by the Suffolk County Hate Crimes Task Force, an investigative panel assembled after the death of Ecuadorian immigrant Marcelo Lucero in November 2008.

Legis. DuWayne Gregory (D-Amityville), the head of the task force, unveiled an ethics complaint against Chief Deputy Executive Edward Dumas, whose office allegedly trimmed the report by a third, from 150 to 98 pages, striking out sections that voiced criticism of County Executive Steve Levy.

Dumas denied editing the report, aside from striking out a table of contents from a section about the Suffolk County Police Department.

At the press conference, several immigrant advocates spoke, addressing the allegations and the report:

Renee Ortiz, chief deputy clerk of the Suffolk County Legislature and a member of the of the Hate Crimes Task Force, said that the hard work of the task force had been sullied by the unauthorized edits made to the report:

Greg Maney, a sociology professor at Hofstra University, asserted that strong leadership can either foster or reduce hate crimes, and questions the leadership in Suffolk: