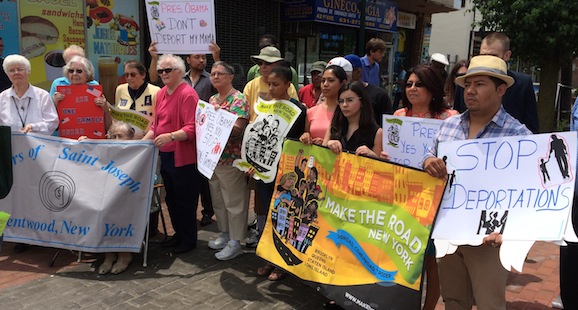 As part of a National Day of Action, members of Long Island’s advocate community held a press conference across from Ross Memorial Park in Brentwood to demand President Barack Obama take action to stop the rampant deportations that continue to needlessly separate immigrant families.

“We are in the middle of a deportation crisis,” said Maryann Slutsky, Long Island Wins’ executive director. “This is a human rights issue and we as country have a moral obligation to do something about it.”

Patrick Young, esq., program director of CARECEN and a blogger for Long Island Wins, told Republicans to have courage and pointed to Long Island’s Rep. Peter King as an example of a GOP member whose standing with the party and his electorate has not been hurt by supporting immigration reform.

Hundreds of other demonstrations took place throughout the U.S. Stay tuned to Long Island Wins for more information.