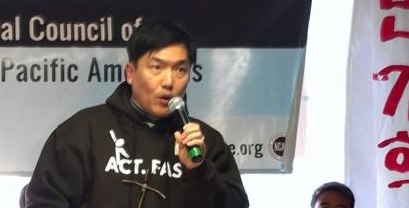 Comprehensive immigration reform means so many things to so many people around the country. There are more than 11 million undocumented immigrants living in the shadows who are unable to contribute to the country that they call home. More than 1,100 families are torn apart every day through senseless deportations. And yet Congress has stalled on comprehensive immigration reform.

A group of activists has gathered at our nation’s capital for the Fast for Families on the National Mall, an action to put pressure on Congress to act on immigration reform. The fast is entering its fourth week. Above is video of the fast, courtesy of Voice of America.

In support of their efforts, President Obama and first lady Michelle Obama on Friday visited with a group of fasters, praising organizers Eliseo Medina and Dae Joong Yoon and thanked “all of the fasters for their sacrifice and dedication, and told them that the country is behind them on immigration reform,” according to a White House statement.

The president said “it is not a question of whether immigration reform will pass, but how soon,” according to a White House statement. “He said that the only thing standing in the way is politics, and it is the commitment to change from advocates like these brave fasters that will help pressure the House to finally act.”

Republican House Member Rep. Jeff Denham also visited the fasters, saying in response, “It is a tremendous commitment, what they have been through…I think it’s going to have an impact with more and more members…It helps us bring great recognition to the overall issue.” 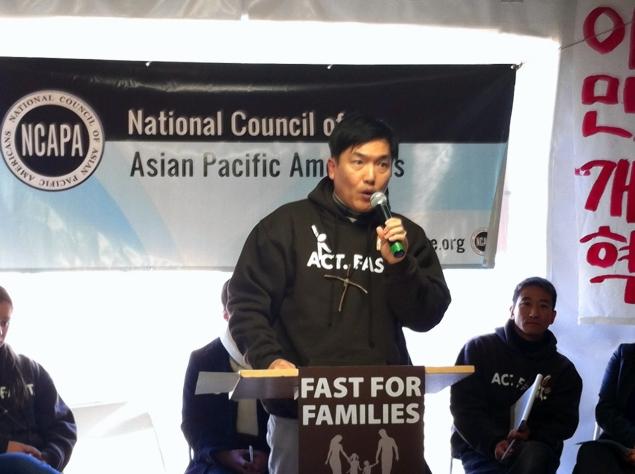 S.J. Jung of the New York Immigration Coalition addresses the Fast for Families. Photo courtesy of the MinKwon Center.
Among those who were a part of the fast was S.J. Jung, a board member of the New York Immigration Coalition and the president of the MinKwon Center for Community Action in Flushing. He spent eight days fasting before dehydration and acute abdominal pain forced him to quit.