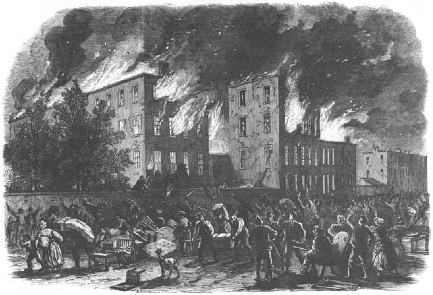 This blog is part of The Immigrants’ Civil War series.

Last night I joined an overflow crowd at the New-York Historical Society to watch a panel discussion on the New York City Draft Riots of 1863.

C-SPAN recorded this panel and you can watch it here.

The discussion was part of a series by the society entitled “The Civil War: 150 Years,” and it included Barnet Schecter, the leading living expert on the riots; Harold Holzer, an award-winning author of 36 books on Lincoln and the Civil War; and Barry Lewis, who you may have seen on PBS where he explains the history of different New York neighborhoods.

Holzer began the discussion by criticizing historians for glossing over the riots. Because they highlight racism in the North, the riots might be seen as an embarrassment by historians, he said. He noted that violence in other parts of the North had preceded the New York riots. Schecter agreed, saying that the first killing associated with the draft occurred in Indiana and that anti-draft violence occurred in many places.

The New York rioters were originally protesting the draft, as well as the imposition of federal power in the city, according to Barry Lewis, but the protest soon turned into a race riot. Prior to the Civil War, he added, if one was talking about a race riot in New York it was between the Irish and the Yankees. New York’s Irish became the first “hyphenated Americans,” contended Lewis, because of the powerful impact of their leader, Bishop John Hughes.

“We were a white Anglo-Saxon Protestant country” in 1860, said Lewis, and Hughes was a Catholic from Northern Ireland who hated Protestants. Hughes, says Lewis, “demanded equality for Irish Catholics, but he thought of getting it through the Constitution, not through revolution.”

The demand for equal treatment was met with racist images of the Irish in the native press that depicted them as gorillas and sub-humans.

When the war broke out in 1861 it was not at all certain that New York wanted to side with the Union. Putting on his walking tour hat, Lewis said that “those Italianate building in Tribeca on Duane and Reade were filled with cotton.” New York’s economy was heavily dependent on trade with the South and many New Yorkers profited indirectly from slavery. During the lead-up to the war New York had been the center of the abolition movement, but it was also the center of the Northern anti-abolition movement.

As the war progressed, New York Democrats became increasingly fearful of the federal government. The United States government had never had much influence in localities before the war. Now agents of the Republican government in Washington set up spy networks in the city and government agents arrested suspected subversives. A large military force, called the Provost Marshall’s Office, was established to stamp out pro-Southern activities. Holzer said that New Yorkers viewed this “as a huge federal imposition on the city” and Lewis added that “it was almost like a foreign government was coming to occupy us.”

The 1863 draft was the first attempt ever at conscription by the federal government. In the past, states and cities had recruited men for the army, but now Washington would round men up at the point of a bayonet for service.

“Democratic politicians fused the fear of the draft with the recent emancipation proclamation,” creating a dangerous combination, Schecter said. The fact that wealthy men could buy their way out of the draft for $300 – several years pay for an immigrant working man—added a class dimension. The Democrats were sending an unpopular message to New York’s working class, Schecter said: “You are going to be drafted and sent to fight, while the black man takes your job and the rich man buys his way out…The working class felt cornered.”

Because there was no social safety net at the time and soldiers pay was poor and often delayed for months, impoverished immigrants understood that if they were drafted they were leaving their families to starve.

When the riot turned into a racial pogrom, at least a dozen blacks were lynched by the mostly Irish mob. Some black communities went out of existence as their denizens fled to Brooklyn. Neighborhoods where blacks and Irish had once lived side by side became rigidly segregated.

There was also a civil war within the Irish community. As most of the rioters were Irish, so too were most of the men trying to suppress the riot. Leading the anti-riot efforts was the old commander of the Irish Fighting 69th, who saw his home ransacked by the mob for his efforts. Schecter said that the level of fighting was intense, with federal troops opening fire on the mob and using cannon to disperse the rioters. “Most of the casualties were the rioters themselves,” he said.

Video: C-SPAN recorded this panel and you can watch it here.