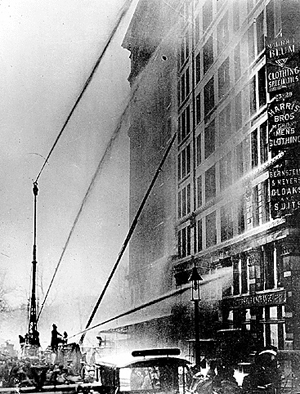 In remembrance of the 100th anniversary of the Triangle Shirtwaist Factory Fire, PBS will air the documentary Triangle Fire at 9pm tonight.

One hundred and forty-one workers, mostly newly immigrated Jewish and Italian women and girls, were killed in the fire on March 25, 1911. It was the worst industrial accident in New York City’s history.

Because the garment workers at the factory, located near Washington Square, were already beginning to organize unions when the fire broke out, workers were able to press the state government for sweeping reforms in working conditions and safety protections.

The International Ladies Garment Workers Union and other unions in the needle trades were strengthened as a result, and immigrants from all over the world joined together in fighting for a better life.

Here’s a preview of the documentary:

The New York Times reported on the carnage the following day:

Three stories of ten-floor building at the corner of Greene Street and Washington Place were burned yesterday, and while the fire was going on 141 young men and women—at least 125 of them mere girls—were burned to death or killed by jumping to the pavement below.

Most of the victims were suffocated or burned to death within the building, but some who fought their way to the windows and leaped met death as surely, but perhaps more quickly, on the pavements below.

The victims who are now lying at the Morgue waiting for some one to identify them by a tooth or the remains of a burned shoe were mostly girls of from 16 to 23 years of age. They were employed at making shirtwaists by the Triangle Waist Company, the principal owners of which are Isaac Harris and Max Blanck. Most of them could barely speak English. Many of them came from Brooklyn. Almost all were the main support of their hard-working families.

A heap of corpses lay on the sidewalk for more than an hour. The firemen were too busy dealing with the fire to pay any attention to people whom they supposed beyond their aid. When the excitement had subsided to such an extent that some of the firemen and policemen could pay attention to this mass of the supposedly dead they found, about half way down in the pack, a girl who was still breathing. She died two minutes after she was found.

At 4:40 o’clock, nearly five hours after the employees in the rest of the building had gone home, the fire broke out. The one little fire escape in the interior was never resorted to by any of the doomed victims. Some of them escaped by running down the stairs, but in a moment or two this avenue was cut off by flame. The girls rushed to the windows and looked down at Greene Street, 100 feet below them. Then one poor, little creature jumped. There was a plate glass protection over part of the sidewalk, but she crashed through it, wrecking it and breaking her body into a thousand pieces.

Then they all began to drop. The crowd yelled “Don’t jump!” but it was jump or be burned—the proof of which is found in the fact that fifty burned bodies were taken from the ninth floor alone.

They jumped, they crashed through broken glass, they crushed themselves to death on the sidewalk. Of those who stayed behind it is better to say nothing—except what a veteran policeman said as he gazed at a headless and charred trunk on the Greene Street sidewalk hours after the worst cases had been taken out:

“Is it a man or a woman?” asked the reporter.

“It’s a human, that’s all you can tell,” answered the policeman.