A new report from the George Washington University Program on Extremism shows that far-right Nazi and white supremacist networks are growing rapidly online. According to the report released this week:

Islamic State, also known as ISIS, has distinguished itself as a pioneer in the use of social media for recruitment. But, while ISIS continues to be one of the most influential terrorist groups in the material world, other extremists are closing the gap in the virtual realm. On Twitter, ISIS’s preferred social platform, American white nationalist movements have seen their followers grow by more than 600% since 2012. Today, they outperform ISIS in nearly every social metric, from follower counts to tweets per day.

This chart shows the growth of the racist-right on Twitter: 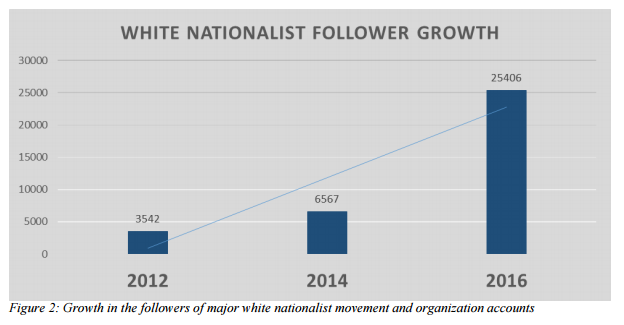 According to the report; “Major American white nationalist movements on Twitter added about 22,000 followers since 2012, an increase of about 600%. The increase was driven in part by organized social media activism, organic growth in the adoption of social media by people interested in white nationalism, and, to some extent, the rise of organized trolling communities seeking to flood social media platforms with negative content, regardless of participants’ actual beliefs.”

White nationalists are using Twitter to claim that non-whites and immigrants are a danger to American society. “The most popular theme among white nationalists on Twitter was the concept of “white genocide,” the notion that the “white race” is directly endangered by the increasing diversity of society,” the report says. “Social media activists tweeted hundreds of times per day using repetitive hashtags and slogans associated with this trope,” says the report.

White racist Twitter pushes certain hashtags. According to the report; “#whitegenocide was the most tweeted hashtag in both datasets, and users within the white nationalist set frequently tweeted an associated slogan: ‘Anti-Racist is a code word for AntiWhite.’ Known as ‘the mantra,’ it and the ‘white genocide’ phrasing both originated with a white nationalist named Bob Whitaker, who is also nominally running for president.”