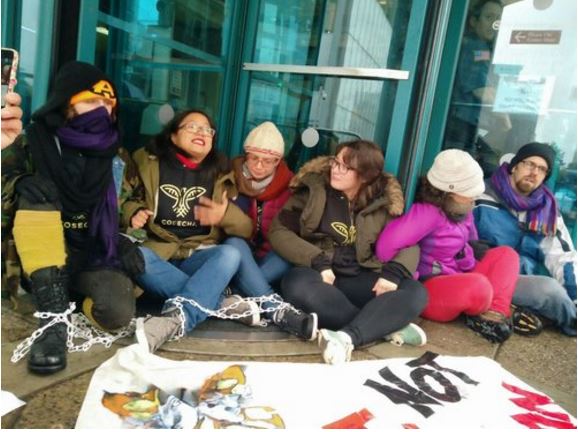 Word has come of new ICE raids in Buffalo. According to Charlotte Gossett-Navarro of the New York Immigration Coalition:

On Tuesday, October 18th Immigration and Customs Enforcement (ICE) raided four well known Mexican restaurants in Buffalo NY and detained 25 workers. Per local organizers – ICE ransacked their families’ homes, threw their belongings in the basement, and [took] their savings, including one worker’s $10,000 that she had saved up for her daughter’s college education. At least 3 immigrants are currently in detention centers, while another 6 have ankle bracelets, meaning they cannot work and are under constant supervision by ICE. The restaurant owners were charged by the Department of Justice with “conspiracy to harbor illegal aliens.”

This raid comes less than two months after the related arrest of 10 undocumented workers from a school playground in Orchard Park outside of Buffalo. These raids are in direct conflict with President Obama’s promise to end workplace raids, keep families together, and limit ICE enforcement to specific priorities.

A website has been started to provide support to the Buffalo25. You can sign a petition, donate to the families, and find out how to advocate for them. Here is the address: http://www.buffalo25.com/