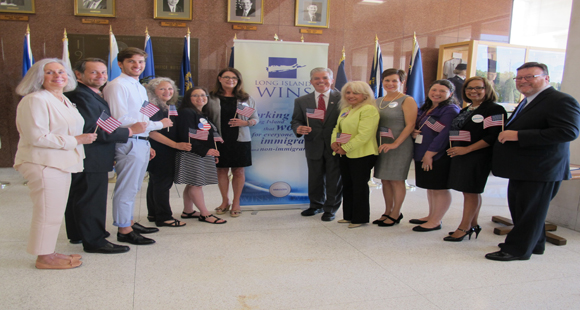 As Europe and the U.S. debate migration, communities small and large, rural and urban, are moving full steam ahead to welcome immigrants and expand prosperity during National Welcoming Week September 12th to 20th. Over 230 events in 33 states will honor immigrant contributions, build bridges among diverse local residents, and spur local policy on inclusion.

“Long Island Wins is inspired by the growing global movement of welcomers and the continued momentum of civic leaders in the U.S. who recognize that our communities are stronger and more prosperous when they are welcoming,” said Long Island Wins Executive Director, Maryann Sinclair Slutsky. “We commend County Executive Steve Bellone, for his continued leadership in recognizing the value that a diverse community brings to Suffolk County.”

The 4th Annual National Welcoming Week will include more partners, states, and events across the country than ever before. Over 250 organizations have partnered with Welcoming America this year.

This will be a significant year as Long Island Wins, in partnership with Suffolk County, recognizes five prominent individual/organizations of the community for their outstanding efforts in welcoming and supporting Suffolk County’s diverse immigrant community.

Welcoming Week also comes ahead of the Papal visit to the U.S., where the Pope is expected to speak to Congress and the American public about the need to be more welcoming toward immigrants.

“Suffolk County is a place where we welcome the diversity of our residents,” said County Executive Steve Bellone.  “It is this diversity that makes Suffolk County a great place to live and work.  During my administration we have and will continue to work to ensure we are serving all residents of Suffolk County.  Our Landmark Executive Order-Language Access has proven to serve those residents who need access to County government but a language barrier may exist.  Since its implementation last year, there have been requests for translation services in over 34 different languages.”

National Welcoming Week is expected to bring together thousands of people nationally, who, like the majority of Americans, see immigrants as a source of strength and are embracing their new neighbor, both immigrant and U.S.-born.

Long Island Wins is a nonprofit communications organization that focuses on immigration issues on Long island and beyond. We promote commonsense immigration solutions rooted in respect and dignity that work for all Long islanders, immigrant and non-immigrant alike.

Welcoming America is a national nonprofit that help communities across the country reach their full economic and social potential by becoming more welcoming toward immigrants. Welcoming America brings together a broad network of non-profits and local governments from across the U.S. and strengthens their work with the know-how, tools and incentives they need to transform their communities in to vibrant, prosperous places where all residents can contribute.