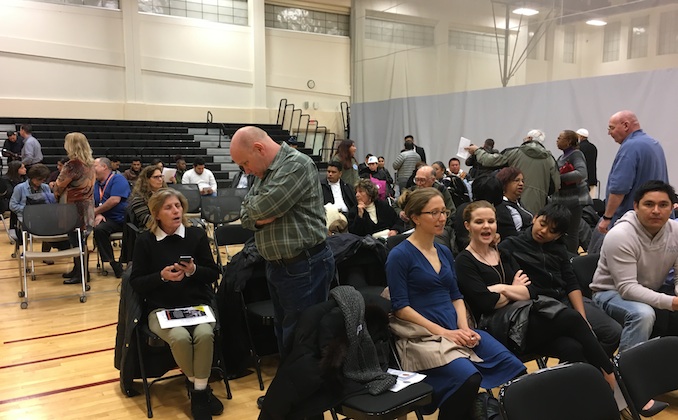 On March 2nd, nearly 100 people gathered in the Yes We Can Community Center in Westbury to share their concerns and questions with the Nassau County Police Department, who hosted the town hall. Those present in the crowd included members of the Latino, Muslim and Haitian communities as well as school administrators, immigration attorneys, immigration activists and advocates from Westbury and the surrounding towns.

Many participants had questions about Immigration and Customs Enforcement (ICE) procedures and activities on Long Island, citing the high levels of anxiety and fear in various vulnerable communities. However, Commissioner Thomas Krumpter would not answer questions on ICE, citing that the two law enforcement agencies are separate entities and that he did not feel comfortable answering anything about ICE. Many in the crowd became frustrated when they were routinely told by Commissioner Krumpter that he would not answer any ICE procedural questions.

Dr. Hala Ubaid, a resident of Westbury, told Long Island Wins that she hoped the meeting would address pressing concerns in the community: “I wanted to hear what the police commissioner had to say about what they’re doing in terms of hate crimes, in terms of what they’re doing for the immigrant community here who are living in fear. Also what they’ll be doing in terms of beefing up security and how they plan to reach out to the minority communities and let them know that they are safe.”

Concerns that were brought up during the meeting included ICE agents waiting outside of schools and houses of worship, the warrant round-ups that the police had recently carried out in the area and how closely the Nassau County Police Department work with ICE. Commissioner Krumpter made it clear that a victim of a crime or a witness would not have their immigration status questioned, but those arrested for a crime would. That information would then be shared with ICE, who could then request the department to collaborate with them by holding them until ICE could pick them up.

There were also some discrepancies in the information presented by the police. Commissioner Krumpter stated that since January 1, 2017, only two arrests had been made by ICE in Nassau County. However, both PIX 11 and WABC released a list on February 17th of forty-one undocumented individuals who were picked up by ICE in the New York metro area, including seven in Nassau County: one in New Hyde Park, one in Elmont, one in Island Park, two in Hempstead, and two in Roosevelt.

Walter Barrientos, an organizer with Make the Road NY, told Long Island Wins that the town hall was important for the public’s sense of security. “This is a welcome step from the police department to hear the community… [We can see the damage] this kind of message that they are sending out is for local law enforcement and the safety and well-being of local communities.”

Susan Gottehrer, the director of the Nassau County Chapter of the New York Civil Liberties Union, echoed this sentiment: “Commissioner Krumpter’s willingness to hear concerns from threatened communities is certainly a good start in re-building trust with those who feel excluded from Police protection. He can build on this by providing clear and detailed information about where, when, and how ICE requests are honored, and set constitutionally clear boundaries by requiring judicial warrants from ICE, which are signed by judges, as a condition of cooperation. This will go a long way in both re-building trust, while continuing to keep all Nassau residents safe…which is the ultimate goal.”

There were no interpretation services offered during the meeting, even though Westbury has a significant portion of the population whose primary language is Spanish or Haitian Creole. Barrientos told Long Island Wins that this was a critical aspect when dealing with the community: “Interpretation [services are] not that expensive – that can no longer be an excuse in this moment. And they need to be communicating with the community when they’re doing something [because] that’s exactly where trust is lost.”

The Nassau County Police Department will be holding town halls across the county over the next few weeks to address additional concerns. The next town hall will be held at the Elmont Library on March 6th at 7pm.

You can watch the full town hall below: