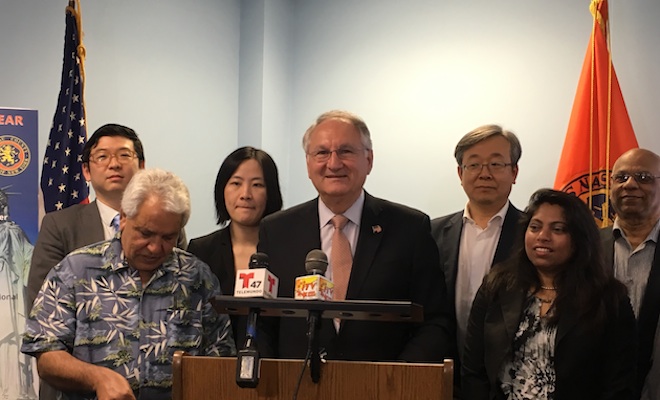 Nassau County Comptroller George Maragos met with several immigrant advocacy groups on June 1st and held a press conference concerning the lack of clarity on local law enforcement’s policy concerning Immigration and Customs Enforcement (ICE) detainers. Administrative, or non-judicial, detainers are different from judicial detainers in that they are not signed by a judge and do not go through due process. Some law enforcement agencies do accept and act on ICE’s administrative detainers, but the Nassau County Sheriff’s Department has been unclear in their policy. Some of the groups present at the press conference were CARECEN, National Action Network Nassau County Chapter, South Asian American Voice, the Great Neck Chinese Association, and Korean American Civic Empowerment.

“Unlawful detainment can affect our local economy, expose the county to legal liability under possible wrongful detainment, and weaken public safety,” Comptroller Maragos told the press. “Our request to the administration to publicly clarify the county’s immigration detainment policies and the cooperation with ICE has been largely ignored. The response by the county sheriff provided some information, but also raised concerns that non-judicial administrative ICE detainment requests are routinely approved without adequate review for probable cause.”

“Non-judicial detainers are a threat to our democracy, due process of law, and possibly a violation of the constitutional rights enjoyed by all of us in this room and across this nation,” Soma Syed of South Asian American Voice said. “We need to make Nassau County a welcoming home for immigrants.”

Emmanuel Asse of the National Action Network Nassau County Chapter also discussed the Temporary Protect Status (TPS) facing the Haitian community on Long Island, which could leave many Haitian residents without documentation. “Right now, we’re going through the issue of the TPS,” Asse said. “We’ve been meeting with a lot of elected officials. [The six month extension] is unacceptable. We are asking everyone for support in the hopes that they will extend it to 18 months instead of six months.”

It is important for the community to understand what the county’s law enforcement’s policies are in order to help inform and protect the immigrant community.

Watch the full press conference below: