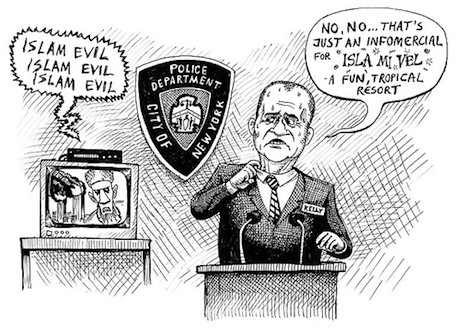 On Tuesday the New York Times reported that the New York Police Department showed nearly 1,500 of its officers “The Third Jihad,” a 72-minute documentary that casts Muslim Americans as ubiquitously engaged in “a strategy to infiltrate and dominate America.” It was the latest item in a growing list of revelations about the NYPD’s profiling and surveillance of Muslim Americans, and now it has prompted demands that the police commissioner, one of the city’s most powerful public figures, immediately step down.

Dozens of community and religious leaders gathered on the steps of City Hall Thursday to call for the immediate resignation of both the commissioner and his top spokesperson. The Muslim American Civil Liberties Coalition convened the press conference following reports that NYPD Commissioner Raymond Kelly and spokesperson Paul Browne had lied about the police department’s use of the video, which depicts Muslim Americans as “homegrown terrorists.”

“Not only did the NYPD show this film to 1,500 officers, but Commissioner Kelly participated in its making,” said Amna Akbar, a member of the Civil Liberties Coalition and a law professor at the City University of New York. “But it does not stop there, either.  Commissioner Kelly lied about his part in the production of that film.”

Last year, the Village Voice’s Tom Robbins broke the story about the video. A police officer who viewed the film during a training session told Robbins, “It just made Muslims look like the enemy. It was straight propaganda.”

Kelly appears in an interview for under a minute in the 72-minute film.

After Muslim community leaders objected to the video’s use last year, Kelly responded in a March 2011 letter, noting that the NYPD “did not participate in the production and we do not believe the content is appropriate for training purposes.”

But on Tuesday, the Times revealed that the video had been aired widely and that the commissioner and his spokesperson had in fact agreed to participate in its production.

On Wednesday, NYPD spokesperson Browne said that in 2007, after the film’s producers approached him, he recommended that Kelly sit down for an interview.

“I agreed, and regret that, considering I thought that somebody with those credentials would have produced a more objective production and that turned out not to be the case,” Browne told WNYC.

The film was financed and produced by a right wing, Zionist organization called the Clarion Fund, which has produced a number of Islamophobic films that have been widely distributed. During the 2008 presidential election, Clarion funded the production of an anti-Muslim film that it then mailed to millions of swing state voters to raise support for John McCain’s candidacy. One of the Fund’s major donors is Sheldon Adelson, who recently poured millions of dollars into a super PAC that backs Newt Gingrich.

Kelly gave a 90-minute interview to the film’s producers. In several minutes of that footage posted online by the producers, Kelly noted that operatives connected to Iran and Hezbollah pose a threat to the city. “Hezbollah is a formidable group, there’s no question about that. Do they have a presence here in this country? We have to assume that they do.”

The narrator of “The Third Jihad,” who claims to be a lone, moderate Muslim who was “outcast by the Islamic leadership across the country” opens the film warning of a homegrown movement of Muslims who will commit acts of terrorism and impose sharia law on the United States.

“We all know about terrorism,” the narrator says. “This is a war you don’t know about.”

In addition to calling for Kelly and Browne to resign, the Muslim American Civil Liberties Coalition is also calling for the NYPD to retrain the police officers who viewed the film and for the City Council to institute an independent community oversight mechanism to place a check on the NYPD’s practices.

Apologies, But No Changes

“Commissioner Kelly should not step down. I think it’s fair to say that it was a little bit of an embarrassment that this film was made,” said Bloomberg, WNYC reported.

Bloomberg also said he would not support the retraining of officers or additional oversight of the police department.

Instead of action, on Wednesday Commissioner Kelly issued a tepid apology.

“I offer my apologies to members of the Muslim community,” Kelly wrote in a statement.

“While it never became part of the Department’s curriculum,” he wrote, “and was not authorized for any training, regrettably it was shown in a room where officers … view it over an extended period in 2010.”

A number of City Council members spoke at the press conference as well. Jumaane Williams, a Council member from Brooklyn called for Browne’s immediate resignation, though stopped short of demanding Kelly’s ouster.

“There are too many instances where he has blatantly lied about what is going on with the NYPD to the tax payers to pay his salary,” Williams said of Browne. “If the mayor and the commissioner will not hold [Browne] accountable—will not hold themselves accountable— then perhaps it’s time for them to go as well.”

Last year Council member Williams was the target of the NYPD’s racial profiling practices when he was arrested without cause while trying to enter an event at the Brooklyn Museum, during Brooklyn’s annual West Indian Day Parade. At the time of his arrest, Williams was wearing a Council member’s pin on his lapel.

After Thursday’s press conference Williams told Colorlines.com, “There’s only so much disrespect and feeling like someone’s in your community to hurt you and harm you—-and you’re paying these people to do it; you feel under siege—there’s only so much you can take of that.”

The revelations about “The Third Jihad” come as little surprise to many in the Muslim community in New York, who have been the targets of growing surveillance and infiltration by the NYPD.

Last year, The Associated Press reported that the NYPD has been engaged since 9/11 in systemic practices of surveillance, infiltration and “mapping” of Muslim communities. According to an August 2011 AP investigation:

undercover officers, known as “rakers,” [are sent] into minority neighborhoods as part of a human mapping program, according to officials directly involved in the program. They’ve monitored daily life in bookstores, bars, cafes and nightclubs. Police have also used informants, known as “mosque crawlers,” to monitor sermons, even when there’s no evidence of wrongdoing.

The NYPD has also made extensive use of informants who infiltrate communities. The AP reported:

[The NYPD] dispatched more officers to Pakistani neighborhoods and, according to one former police official directly involved in the effort, instructed them to look for reasons to stop cars: speeding, broken tail lights, running stop signs, whatever. The traffic stop gave police an opportunity to search for outstanding warrants or look for suspicious behavior. An arrest could be the leverage the police needed to persuade someone to become an informant.

The informants’ activities have led to convictions. But it has become increasingly clear that these convictions are based on practices that amount to entrapment. In many cases, the terrorism plots would never have existed were it not for the work of the informants, who often presented fake plots to vulnerable young men with no previous connections to terrorist organizations. When the men agreed to participate, often in secondary roles and with trepidation, they were arrested and the NYPD and federal officials claimed victory in foiling the attacks they dreamed up in the first place.

On Thursday, Akbar explained that the press conference had been called “not just because of the recent revelations of their involvement with ‘The Third Jihad’. It’s because a number of actions they’ve taken and the approach their department has taken to policing our communities—to infiltrating them and to treating us like we’re suspects when we’re just living our lives day to day.”
Image courtesy of boris.rasin via Flickr.