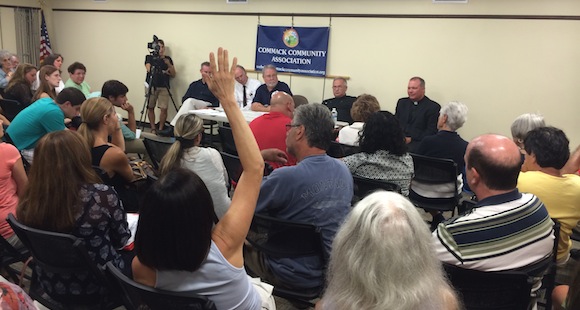 At a community forum at the Commack branch of the Smithtown Public Library on Tuesday night, local residents expressed a variety of grievances with Holy Cross Lutheran Church. Their reasons were widespread, and, as Rev. Marc Herbst, who oversees strategic plan implementation for the church told the crowd numerous times that night, their concerns needed to be heard.

But when it came to discussion about immigrant children, it was clear that much of the objections were based on misinformation.

Holy Cross had considered the idea of caring for immigrant children after losing a contract to house a day care on premises. The proposal was an attempt to make up for the loss of income and utilize available space. It is now on hold, Herbst said, due to a missed deadline, but was not off the table.

At the forum, which was organized by the Commack Community Association, residents expressed upset at the lack of transparency in the church’s decision-making process. They suggested alternative solutions, offered to volunteer their time, and even promised to submit their own proposals for how to utilize Holy Cross’s vacant space. Ideas included a VA center, drug and alcohol counseling, a youth center, and more—anything other than helping the children fleeing their homeland and seeking refuge in the U.S.

Why? Simply put, they are afraid. And these fears are based on misinformation.

Whispers that aiding the children would lead to overpopulation and a “change in culture” in the community could be heard even before the meeting got started. Commack is 88.6 percent white and only 4.8 percent Hispanic. The proposal would have allowed the church to care for up 40 Central American children, who would have stayed at the facility for anywhere between two weeks and two months before being placed with family members, some of whom may not even reside in New York state.

While some residents made blatantly anti-immigrant remarks, others showed more common sense. Although they seemed close knit, patriotic, and eager to help, they were clearly overwhelmed by unwarranted fears.