Everybody is agreed: Javier* is one brave little guy.

In June, he stood up on the stage of his middle-school’s auditorium and looked out at 150 fellow students, most of whom were older than him. He told them about the time not long ago that he walked across the border from Mexico.

“He became emotional,” said Kira Neel, who works with Story Studio, a program that helps immigrant children learn English through telling personal stories they have developed, written and illustrated themselves.

Indeed, on that afternoon, Javier’s small frame began to shake with sobs. Neel put her arm around his shoulder and spoke quietly to him. He nodded like a boxer receiving advice and encouragement from his trainer.

He resumed the story, telling how he was taken to a car that was then driven through the strange new country. After a short while, he again struggled with his emotions and again he nodded to renewed words of comfort. “I told him he’d done an amazing job and could stop and sit down,” Neel said.

But Javier, little fighter that he is, insisted on finishing.

Finally, to huge applause, he recounted how the car reached New York City and he was reunited with his family after a long separation.

“He said to me afterwards that it was the first time he had told anyone the story,” Neel reported. His friends knew it in outline—indeed all those who spoke that afternoon were chosen by their classmates—and the teacher had helped with his English, but Javier had never previously attempted to relate it completely from beginning to end.

“It’s very much a catharsis in a way,” Neel said of Javier and other students whose storytelling focused on times of bravery, trauma and loss.

Listen to sixth grader Maria talk about losing her mother:

Listen to eighth grade student Uqsa’s poem about a troubled man in Pakistan:

Greg Ayers, who directs the federally-funded Story Studio program for the Urban Arts Partnership, said that his main obstacle was convincing administrators and teachers in New York City public schools that it would help improve the English language learners’ language ability.

“There’s no way that’s going to happen,” was a common response to the idea that immigrant children would stand up and tell personal stories. “They thought the students would be too shy,” Ayres said. “And that it was too high stakes.”

“They were surprised that it did work,” he said, referring to staff at the five New York City middle schools that agreed to try the program in the 2010-11 academic year. 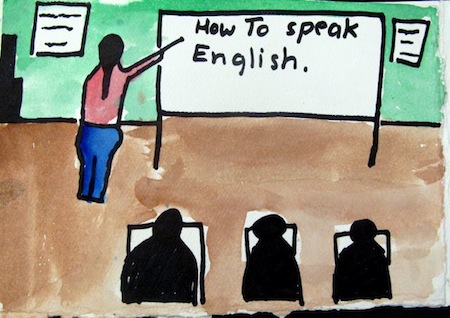 An immigrant middle school student drew this picture for the Story Studio project.

A consultant to non-profit education organizations, Ayres specializes in integrating the arts into standardized education. However, he’d had very little experience working with immigrant children. “I had to consult more specialized people in ESL,” he said. As someone, though, with a background in journalism, he knew all about the power of storytelling.

Jennifer DiFiglia, the Urban Arts Partnership’s director of programs, says Story Studio is “extremely effective,” even if they don’t have metrics to prove it yet.  ”We can see it with the students in their fluency and in their confidence level in conversation,” she said.

Listen to Jennifer, a sixth grade student, tell the story of finding out she would have a little sister:

“And for these children to be able to stand up to tell a story is obviously an accomplishment,” she added.

Ayers said one challenge in popularizing the program is the current focus on test scores. “Teachers are under a lot of pressure,” he said. “Something like this—if they’re not able to see directly that it improves scores, then they feel that it might be taking up time.”

So DiFiglia and her colleagues will be watching test scores closely. All students take the New York State English Language Arts test and the New York State English as a Second Language Achievement Test, both of which assess English-language reading and writing skills. It’s with the latter, which has a speaking and listening component, that DiFiglia predicts Story Studio should help the most.

Outside of testing improvements, the program administrators found encouragement in the way Story Studio motivated the students to share personal stories. DiFiglia cited Javier’s tale as a perfect example.

“We were really impressed that he had the drive and confidence to get through it,” she said.

* Javier is a pseudonym to protect the boy’s identity.

Peter McDermott is a Feet in Two Worlds Education Reporting Fellow. Fi2W fellowships are supported by the New York Community Trust and the John S. and James L. Knight Foundation with additional support from the Mertz Gilmore Foundation and the Sirus Fund.

This post originally appeared September 13, 2011, on Feet in Two Worlds.