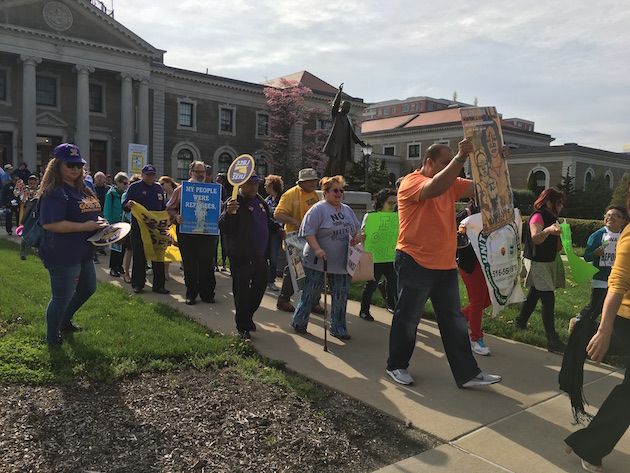 May Day is International Workers’ Day, wherein workers from around the world are celebrated for their contributions. On Long Island, community groups used the day to protest the anti-immigrant rhetoric and policies of the current administration which threaten our communities.

On the morning of May 1st, nearly 50 people gathered at the Make the Road NY office to march to Ross Park and later to the nearby Chase Bank branch in Brentwood to deliver a letter protesting its support for this administration’s policies that discriminate against our vulnerable communities. When the procession reached the park, they were joined by students from the Sisters of St. Joseph, increasing the crowd to over 100 participants. Several speakers addressed the protesters, including State Assemblyman Philip Ramos, Maryann Sinclair Slutsky of Long Island Wins, Gaby Castillo of the Long Island Civic Engagement Table, members of Make the Road NY, SEPA Mujer and a representative from Legislator Monica M

“Immigrants built this country. They make up 23% of Long Islands working population, they are responsible for 20% of Long Islands economic growth,” said Slutsky. “May Day is an opportunity to bring to light the struggles of workers and immigrants of all backgrounds. Most importantly, it is a chance to show up for the inspiring and diverse immigrant leaders who have asked that everyone join them in demanding a better future.”

“We stand here loving this country. We came here because we love this country, because the opportunities are here, but we are actually fighting for the American Dream. That American Dream is what we want an opportunity for,” said Assemblyman Ramos. “We will not stand for a President or someone like Jeff Sessions who wants to demonize us.”

“Today is just one day to highlight the accomplishments, the hard work that immigrants take on,” Castillo told the participants, “We are also now voters. We will make sure every day from now on, we will hold every single elected official accountable. We will make demands that will make our communities better and safer for us all.”

When the protesters reached the Chase Bank location, the bank locked both of its doors, and did not allow for two Make the Road representatives and Assemblyman Ramos to enter with the letter, asking, among other things, that the bank stop supporting private immigration detention centers. The representatives were not deterred and instead slipped the letter underneath the door.

Watch the Suffolk County march below:

In the afternoon, several advocacy organizations gathered in front of the Nassau County legislature building to express their support for immigrant workers across Long Island. On the steps of the building, over 70 residents, community activists, and workers spoke about current policies, both federal and local, and how we can protect the immigrant community. Some of the organizations present were Long Island Jobs with Justice, the New York Immigration Coalition, the Workplace Project, Make the Road NY, New York Committee for Occupational Safety & Health, and the Long Island Immigrant Student Advocates. Afterwards, the participants marched down Franklin Avenue towards Hempstead.

Susan Gottehrer of the New York Civil Liberties Union – Nassau County Chapter, addressed the crowd as well. “A large part of the Nassau County economy rests on the backs of the very same people who are currently shouldering the blame of an entire nation,” she said. “And who is Nassau County standing with, instead of their own people? With a bunch of bullies and thugs.”

Mauricio Martinez of 32BJ SEIU spoke as a union member about the change he has seen recently on Long Island. “This recent wave of hate sees us threatened by cruel policies. They have even come in and given us the label of criminals. I am saddened by these politics and for this reason, I send a message to all the people who are not here because they are afraid: take courage, we are not alone because there are people supporting us.”