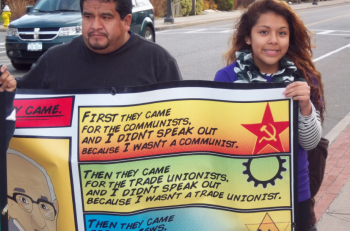 This is the second article of memories of the events surrounding the killing of Marcelo Lucero that were prompted when I saw the new film Deputized on Sunday. I want to see the film again before I review it, but I wanted to tell you about thoughts it brought to my mind. These are less organized than I might write otherwise, but viewing the film was very emotional for me and brought back some raw feelings.

One of the politicians who make brief appearances in the film is former Suffok County Legislator Jack Eddington. The legislator expresses surprise in the film at the notion that he was perceived as antagonistic to immigrants. My friend Luis Valenzuela called Eddington outfor his harsh views on Latinos when he was on stage with him in Patchogue in the days after the murder.

Eddington was a nasty rouser of the rabble in the Pat-Med area. One example should suffice. A Latino I know once testified before Eddington. He asked my friend for his immigration papers. I testified in front of Eddington a dozen times and was never asked about my status. But, I’m not brown.

At the end of the Jeff Conroy trial for killing Marcelo Lucero, the politician inserted himself into the trial. According to a Newsday article at the time:

Of the more than 100 letters submitted to State Supreme Court Justice Robert W. Doyle by Conroy’s family and friends, the Eddingtons were the only elected officials to speak out.

The Rev. Allan Ramirez, an advocate for Hispanic immigrants, said he views the Eddingtons’ letters “as insensitive at best and at worst pandering to the anti-immigrant mentality” that may exist within their community.

However, Jon Schneider, Brookhaven Democratic chairman, defended the couple’s action as a sincere effort to aid a family that lives nearby.

“I think it was a heartfelt personal thing,” he said. “Jack and Pat have been successful in politics because they are two very genuine people who do things from the heart and not in a calculated way.”

Eddington himself said he was not concerned about any prospective political backlash. “I don’t care,” he said. “It was the right thing to do.”

His wife added, “If I can make life easier for people, that’s what I try to do.”

“It’s a sad time,” said the former assemblywoman, who was elected to her town post last November. “I was asked to write a letter because I know these people forever.”

In her letter, Patricia Eddington called the Conroys “a good hardworking family” now facing tragedy. “I just want you to know that Mr. Conroy, his wife and his children have always been there to support the community. I’m writing you today to support the family that has always supported others,” she said.

Jack Eddington and Pat Eddington knew the Conroys, but they didn’t know Marcelo even though he lived and died just blocks from Jack’s office. Jack talked about men like Marcelo as moochers who lived off the system, even though Marcelo worked hard for a living every day since he was seven years old.

When the young men who attacked Marcelo Lucero began terrorizing Patchogue’s Latinos 14 months before the killing, Jack Eddington never wrote a letter to law enforcement asking why the attacks on his immigrant constituents were not being investigated and prosecuted, but he did write one for their tormenter. Eddington knew the Conroys who lived three miles from his office, but he did not know that weekly hate crimes were going on right outside his windows.