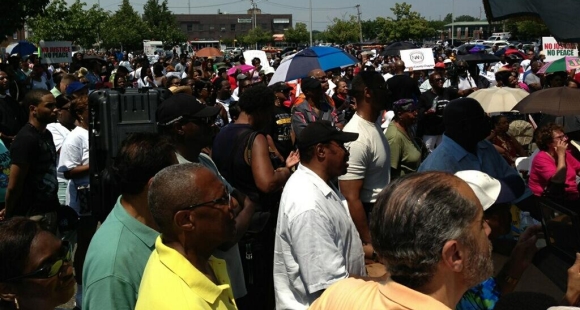 Hundreds gathered in front of the Nassau County Criminal Court House on Saturday afternoon to demand justice for Trayvon Martin, braving the hot weather conditions to call for an end to such acts of senseless violence.

George Zimmerman was found not guilty under Florida’s Stand Your Ground Law on July 13. Following the controversial decision, Americans in over a hundred cities on Saturday held vigils in memory of 17-year-old Trayvon Martin.

Local representatives of Nassau County were present, among them Hempstead Mayor Wayne Hall, the National Action Network and the Hempstead Chapter of the NAACP. Various clergy members were also present, leading the crowd in prayers calling for justice.

One of the most powerful speeches came from an eighth grade student from Hempstead High School, who delivered a heartfelt speech regarding Trayvon Martin’s senseless killing. He mentioned that like Trayvon, he can frequently be found wearing hoodies, eating skittles and drinking Arizona Ice Tea.

This young man mentioned that “walking while black” is now a crime without justice in states like Florida. Furthermore, he stressed that if nothing is done to change the divisive Stand Your Ground Law, more innocent young men will die because of racial profiling.

The key issue that the hundreds in attendance wanted to get across was that America’s history of racial profiling has led to yet another death of a young male that was guilty of nothing and was simply walking home.

Racial profiling is an issue that people of color, including immigrants, have been dealing with throughout our nation’s history. Whether it’s Secure Communities, Arizona SB 1070 or Stop and Frisk, such policies will inherently lead to racial profiling. These are the type of policies that we must stand against and oppose so that America as a whole can move forward.