I am Lisa DeBourg, Administrative Coordinator at Long Island Wins. This summer I was able to travel back to my beautiful Belize in Central America and I wanted to share my trip to my hometown with the Long Island Wins readers. I hope you enjoy reading my journey.

I first came to the United States to visit my family that had started a new and better life here. A few years later, I decided to return to further my education. I enrolled in York College and obtained a bachelor’s degree in Business Administration as an international student. It was at York that I met Angelo. We married and now have three children.

Returning to my native hometown has been on my mind for the past six years. I finally decided to make the arrangements, pack up the kids and go.

Weeks before my trip, I became quite emotional as I imagined seeing my family again after six years. I would cry happy tears each time I thought of seeing my siblings, nieces, nephews, etc.  My kids Elias, Dillon and Ella were excited about going to Belize for vacation. However, I had to warn them that there were no Burger King, Malls, or Sports complex in Belize. This trip to Belize promises to be fun but certainly different from their daily lives in New York, I would tell them. Still they seemed enthusiastic-they were going on an adventure. Packing was fun for them, work for me. Nevertheless, we got ourselves together and made it to La Guardia Airport.

Being a native Belize an, however, it felt strange going home as a visitor. When we arrived at the Belize Airport, we were greeted by the Belize breeze as my friends would say. Filled with happiness in her eyes, my younger sister, Thirza picked us up. Surprisingly enough, I managed to hold back the tears. She drove us to my brother’s home in the country. My family was so happy to see us and the feeling was reciprocal. We were introduced to a heavenly place: beautiful flowering trees, fruit trees, a horse named Brandi, some cats, dogs, alligators, iguana, birds and some chickens. The view and land space was breathtaking.

Papaya, sour sop (a large fruit that has sub acid sweet white pulp), pomegranate, golden plum, cocoa plums, sea grape, mango, banana, custard apple, noni, and vegetables were some of the delectable edibles on the farm. Fried fish for lunch, along with vegetables from the garden and sour sop for dessert; I couldn’t be any happier. The food was so delicious that I forgotten all about my diet plans. Afterwards, I would lie in the hammock as I gazed at the blue skies through the trees.

To my amazement, there were about five ponds on my brother’s property which the kids couldn’t wait to dip their bodies into. Once they were submerged in the ponds we couldn’t get them out. Swimming in the pond became a daily ritual. Even, with a makeshift, basketball court, the boys would play basketball tirelessly and then jumped into the pond to cool off.

On one of our excursion trips, we visited the Belize zoo. The zoo which opened in 1983 was quite an education as the kids learned that over 125 species lived there. They enjoyed feeding the animals and taking photos of the crocodiles, tapir – the national animal, jaguar, toucan-the national bird, eagle, monkey, jaguar, snake, picari to name a few. Not only did they enjoy the animals but just “experiencing the jungle” in its natural habitat was a thrill in itself.

We visited the ancient Mayan cities of Altun Ha in Belize district. Unlike me, the kids were unafraid and beyond excited as they climbed to the top of the temples, the highest being 54 feet. Being oblivious to the dangers of climbing the steep temples, my daughter was not happy when I wouldn’t allow her atop. Later that day with the help of her dad she was able to experience climbing atop a more manageable temple. Even though the kids were novice to temple climbing, they certainly embraced the challenge.

On a very sunny morning, we boated to the cayes (pronounced keys). It was so much fun as we watched the waves pass by and the water splash aside the boat. We couldn’t wait to get our feet on the beach sand and soak up the sun.

My trip to Belize was definitely an escape away from the stress of the life in the US. My kids can barely wait to return to see their family that they bonded so well with. They now have stories to tell when they return to school. My three-year-old daughter was so excited when asked what did she do in Belize. She said “I went to the zoo.” When she was questioned as to what she saw at the zoo she responded “a zebra.” No such animals are in Belize I said. She then said “just kidding” and then uttered a list of the animals that my friends had never heard of.

Six years was too long for me to wait to return home. My family in Belize agrees. We’re already planning for next year. 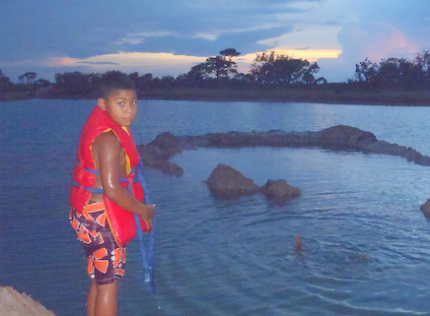