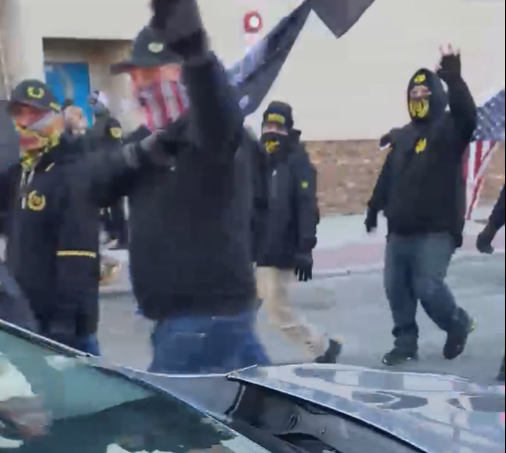 On the Saturday after Thanksgiving shoppers in Rockville Centre were shocked to see twenty-four men in Proud Boys gear marching through the village’s business district. In video of the march, the “boys” carry flags with “PB” [Proud Boys] on them. Many are wearing clothes or hats colored black and gold, the colors of the group. Nearly all are hiding their identity. The group is followed by a yellow pick-up truck with a sign saying “Law and Order” on it. The truck is playing loud music.

At the Proud Boys’ marches in Patchogue and Bay Shore a month ago the group followed the same script. In those two marches, 19 men participated. They were also followed by the same yellow pick-up truck. In all three marches the license plate number of the truck appears to have been covered. In none of the three marches did the police prevent the white nationalist group from taking over the streets, nor did the police ticket the Proud Boys truck for the covered license plate. According to Newsday:

“Rockville Centre Mayor Francis X. Murray, a Republican, said he was not aware of the demonstration and did not know who the Proud Boys were. He declined to comment further about the march.”

Maybe the mayor is the only sentient adult in America who has never heard of the Proud Boys, or maybe he welcomes their presence.

Yesterday the white nationalist Proud Boys marched through Rockville Centre. The mayor of Rockville Centre claims he never heard of the group! This is the third time over the last two months that the hate group has taken over streets on Long Island. Call Rockville Centre Mayor Francis X. Murray on Monday and tell him who the Proud Boys are at 516-678-9300. Press 1 to get the directory for the Mayor’s Office.

Update: I called Mayor Murray today to inform him about the Proud Boys. His aide said he was not available. I told her I would like to speak speak to him to give him the history and inform him about the white nationalist ideology of the group. The aide said “He knows who they are.” I said that he stated on Saturday that he had never heard of them and she told me that he had heard of them. She then claimed that Newsday had misquoted him. It seems like an odd misquote.