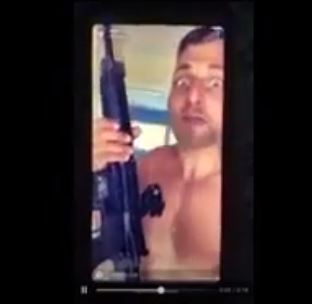 Newsday reports that the real estate license of Jared Aversano has been revoked. Aversano is the REMAX agent from Ronkonkoma who videoed himself with an assault-style rifle and made apparent racist threats against Blacks. I supplied evidence to the state in this case and I will write more about it later. You can watch the video at the bottom of this article. In the meantime, here is what Newsday says:

New York state has revoked the real estate license of a Long Island man who used a racial epithet and made threats while brandishing an assault-style weapon in a widely circulated online video. A state administrative law judge called his actions “racist” and said he could not be trusted.

Jared Aversano, who was an agent at his parents’ Ronkonkoma-based brokerage RE/MAX Eastern Properties until the 14-second video came to light in June, “cannot be relied upon to execute the duties of a real estate professional,” and “the deeply ingrained bad faith and rancor he holds against Black people that he betrayed in his video cannot be erased or softened by an empty apology,” Administrative Law Judge Joan R. Salzman wrote in a 24-page decision released this week by the New York Department of State, which licenses real estate agents and brokers.

Aversano, 23, who lives in Lake Grove, did not respond to a request for comment. His attorney, Dennis Valet, said in a statement Thursday that Aversano “apologizes for his words and the Snapchat video. It was a careless private joke amongst friends and was in no way intended to disparage or threaten any specific individual or group of individuals.”

Valet said Aversano “wholeheartedly disavows unlawful discrimination…. He was 22 years old when he made this mistake…. We ask that you respect his acceptance of responsibility and desire to grow from this experience.”

Aversano has until Dec. 30 to file an appeal, the Department of State said. Valet said Aversano had not decided whether to appeal.

In her Nov. 30 decision, Salzman wrote that Aversano appeared in the video “shirtless, angry, and agitated, his eyes bulging, as he shouts the following repugnant statements, all the while brandishing a large, assault-style rifle: ‘All right, my response to the looting and rioting that’s going on . . . I wish a [racial epithet] would. I went out and spent 1,300 bucks on this [expletive, referring to the weapon], please I want to use it!” Salzman’s decision included the unredacted epithet and expletive. She wrote that Aversano posted the video while the nationwide Black Lives Matter protests following the death of George Floyd in Minneapolis were underway.

The video was viewed more than 1 million times, and led to Aversano being expelled from the Long Island Board of Realtors and receiving a visit from Suffolk County police, Salzman wrote.