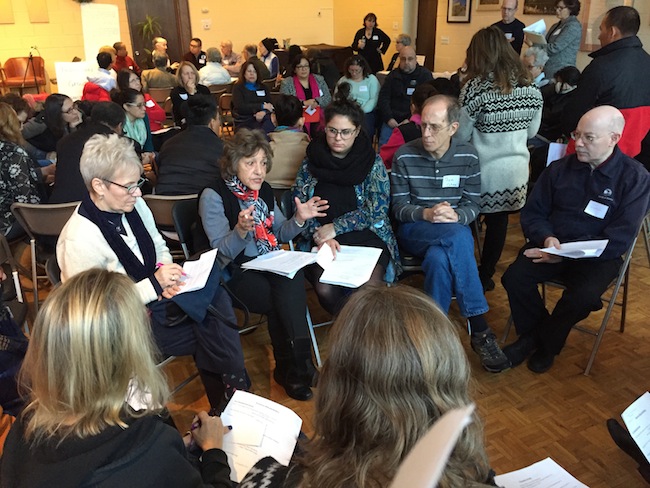 On Sunday, January 8th, over eighty people gathered at the Unitarian Universalist Congregation of Central Nassau in order to discuss how to move forward as a community as many worry about the exclusionary and discriminatory rhetoric from the incoming administration. Hosted by the Unitarian Universalist Congregation of Central Nassau, Nora Bassett of Parent Leadership Initiative of Long Island facilitated the discussion that focused on developing community action and awareness.

Bassett first reviewed the Principles of Unity, a set of four principles developed by a number of Long Island community activists, in order to give concrete ways for concerned people to further act on their ideas after the session. Afterward, the room was split up into six different groups to discuss bias incidents, and how one could use the principles in order to address the incidents and help support others in the community. Groups shared various accounts of discrimination across communities, from Hispanic people being forced out of neighborhoods to a Jewish woman being sent Trump/Pence advertisements to a Muslim man training to be a pilot who was grounded after being put on a terrorist watch-list.

Several organizations participated in the discussion, including Make the Road New York, Long Island Advocacy Center, Planned Parenthood of Nassau County, Holocaust Museum and Tolerance Center of Nassau County, the Long Island Transgender Advocacy Coalition, Parent Leadership Initiative of Long Island, and The Corridor Counts. Make the Road New York also provided interpretation services for those Spanish speakers in attendance. Many of these organizations had a representative speak at the end of the session about the various issues in need of community support, covering topics such as immigration, women’s health, policing issues, transgender rights, student’s rights, and hate crimes.

The District Attorney’s office of Nassau County was also represented at the town hall, emphasizing their commitment to all residents of the county, regardless of their

status. “Whether they’re white or brown or beige, it doesn’t matter. The laws apply to them and regardless of their immigration status, they will be protected,” said Silvia Finkelstein, Assistant District Attorney of Nassau County and Director of the Office of Immigrant Affairs, “And I can tell you with absolute certainty that under no circumstances will the immigration status of a victim or a witness to a crime in Nassau County be reported to anybody. Because our responsibility as district attorneys is to protect all victims of crime.”

But perhaps just as important as the knowledge shared about projects and groups across the Island was also taking the time to come together and listen to one another. “I’m looking at this audience and I would say that if I wasn’t standing here, doing this presentation, there are people in here that I would never cross in my daily path,” Bassett remarked during the talk, “And so how can I understand what your perspective is if I don’t make an effort to understand?”

Below are some of the images from the Nassau Unity Town Hall: