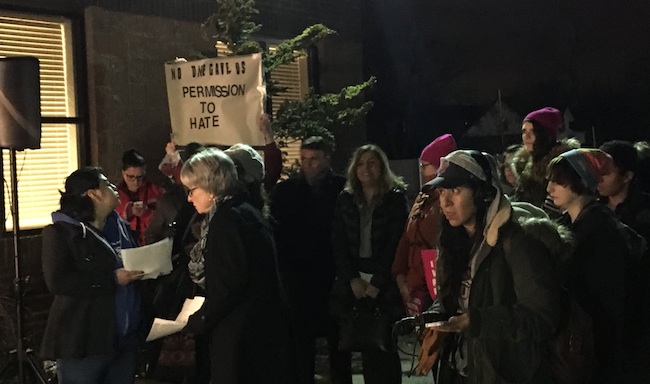 Last week, there were several important community events held before and during the inauguration of President Donald Trump, including unity rallies and inaugural vigils.

On Thursday, January 19th, over 200 members of the community joined together in front of the LGBT Network in Bay Shore. Organized by both the Long Island Progressive Coalition and the LGBT Network, the night included chanting, singing, and even a poster where people wrote encouraging messages of unity and love, all to show the extent of the community’s support.

A number of local organizations spoke, offering messages of hope and a renewal of efforts to protect not just their communities, but all marginalized peoples who might soon be affected by new policies. Among the organizations gathered there were Long Island Jobs for Justice, Long Island Immigrant Students Advocates (LIISA), Planned Parenthood, and Long Island Activists. But even though these different groups had a number of causes, the focus of the evening was on coming together as one united front to fight against injustices, whether it comes from the local, state, or federal level.

“We will stand together, LGBT and straight, black and white, men and women, Latino, immigrant, Muslim, Jewish, people with disabilities, and all other people to say we will stand against hate and policies that attack any one of us,” David Kilmnick, the LGBT Network Chief Executive Officer, told the crowd.

On Friday, January 20th, five vigils took place across Long Island during the inauguration. The largest was at the Our Lady of the Miraculous Medal Roman Catholic Church in Wyandanch, where over 40 people shared their stories, sang, and prayed together. Organized by Roundtable for the Common Good, the vigil gave participants the opportunity to vent their fears and frustrations, as well as make community connections.

“We wanted to give people a sense of hope, and so that if we came together collectively — people of like minds who care about this country and care about our future — we thought that we would pray, celebrate, sing, and just put a good vibe out to the universe that we can change some of the things that we are afraid of,” Sandy Thomas, chairwoman of the Roundtable for the Common Good, tells Newsday.

There were four other vigils organized by Long Island Jobs for Justice held at the same time in Port Washington, Wantagh, Medford, and Setauket. Additionally, two vigils were held on Saturday and Sunday in Patchogue and Brentwood, respectively. The purpose of these gatherings was to provide support for people worried about how the new administration would impact their lives.

There were also numerous Women’s Marches on Saturday across the country that protested the hateful rhetoric and exclusionary policies of the new president. The largest march in the state occurring in New York City, but there were Women’s Marches on Long Island as well, in the towns of Port Jefferson Station, Sag Harbor, and Huntington.