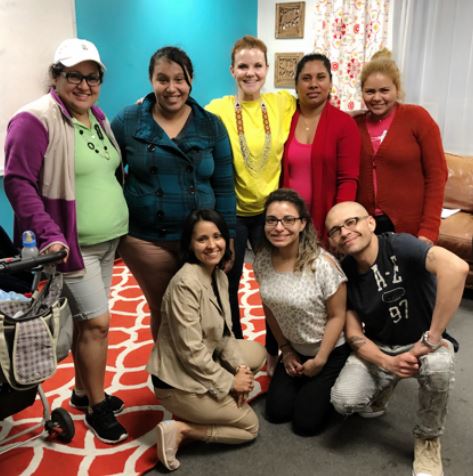 When hundreds of so-called unaccompanied children began arriving on Long Island several years ago, the first reaction of their families here in the United States was relief that a treasured child had escaped the gangs that had forced them to flee. The next reaction was “What do we do next?”

Although the children are legally termed “unaccompanied,” they are only released on Long Island if they have family members here who are willing to act as their guardians who already live here. In most cases, the guardian is a parent. In a smaller number, the guardian might be an adult brother or sister, or an aunt or uncle. For the non-parents, they often have no preparation for taking care of a child. Even the parents are challenged. They may have last lived with their son or daughter a decade earlier.

According to Elise Damas of CARECEN, “the parents and guardians of these kids are really dedicated to their children’s growth and development, and we are here to help them.” The group meets every two weeks at CARECEN’s office at 91 N. Franklin Street, Suite 208 in Hempstead and is open for new enrollees.

It is free of charge and also offers participants free childcare and a light meal.

Damas says that involving Children’s Village, a well-known agency caring for immigrant children, in the project was a godsend.

“They have a unique expertise in working with Unaccompanied Children and their families,” she says. “We want the caregivers to feel like they are meeting with friends in their own living rooms.”

Recent topics have included helping a child resist gang involvement, the emotional needs of recently arrived children, and how to access school services.