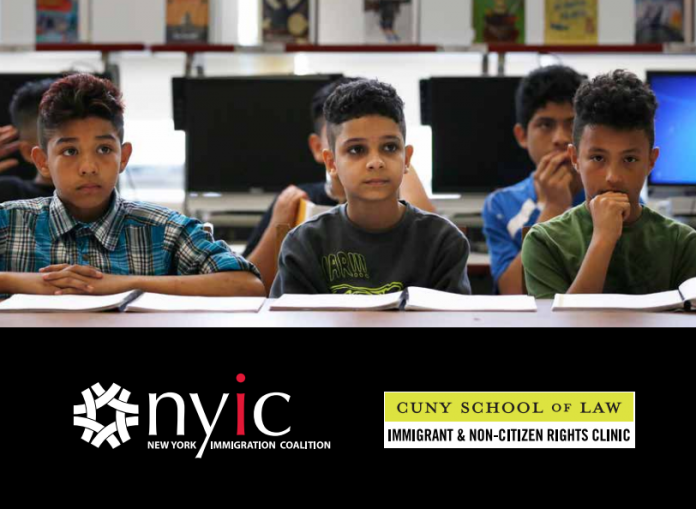 The New York Immigration Coalition (NYIC) and the Immigrant and Non-Citizen Rights Clinic (INRC) at the CUNY School of Law published on Wednesday “Swept up in the Sweep: The Impact of Gang Allegations on Immigrant New Yorkers,” a report documenting how Immigration and Customs Enforcement (ICE) and its partners arbitrarily profile immigrant youth, propelling them into the deportation pipeline.

“The Trump administration is using the ongoing gang violence as a pretext to profile and detain immigrant youth. A backwards baseball cap is not an excuse for a backwards immigration policy. New York will be safer if law enforcement can build trust in our immigrant communities, rather than instill fear in immigrants of being arbitrarily labeled and locked up,” said Anu Joshi, Director of Immigration Policy at the New York Immigration Coalition.

The report describes such questionable criteria for gang affiliation includes wearing certain kinds of clothing, using the Salvadoran country code of “503,” and merely living in a high gang activity neighborhood. It also found that 78 percent of providers reported law enforcement made gang related allegations against immigrant clients and community members.

“Gang databases are purely based on stereotypes. Gang databases do not require any criminal background or even proof of gang membership, instead include being seen with neighbors, friends or families; observed in local bodegas or restaurants or parks; and social media and video content,” said Babe Howell, a gang expert and professor at CUNY School of Law. “Relying on these gang databases for immigration or detention decisions violates due process, equal protection, and adherence to fact-based decision making.”

Since the operation began, 210 individuals from Nassau County and 177 individuals in Suffolk have been arrested, according to ICE data released last month.

The NYIC is also suing ICE and Customs and Border Protection (CBP) for failing to comply with Freedom of Information Act requests to disclose information on ICE’s “Operation Matador,” a partnership with local law enforcement agencies to target alleged gang members.

The full report is available here.