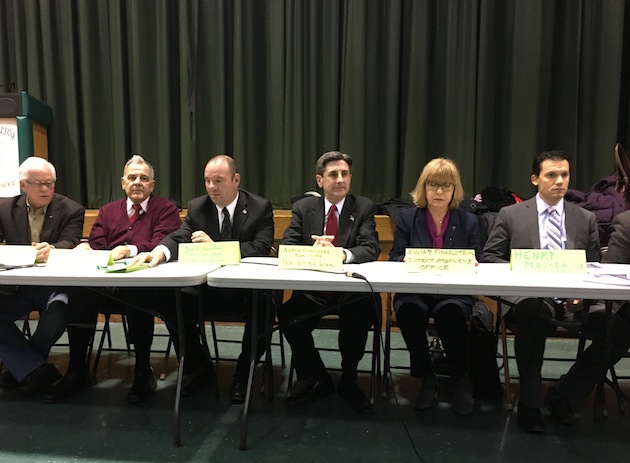 On February 15, over 200 members of the community gathered at Westbury Middle School to discuss the increase of hate crimes, the concerns of vulnerable communities, and how children are being affected by recent events. This is the second in a series of community talks; the first took place at the Islamic Center of Long Island on December 1. Moderators included Dr. Isma Chaudhry, Rabbi Michael White, and Professor Arthur Dobrin.

Panel members included Justice Thomas Liotto, NY State Assemblyman Charles Lavine, Sylvia Finkelstein of the Nassau County District Attorney’s office, immigration attorney Henry Mascia, North Hempstead Town Clerk Wayne H. Wink, Jr., and Westbury School District Superintendent Mary Lagnado. After a brief introduction from the panel, the forum opened for questions, comments, and concerns from the public. Interpretation services were provided by the Westbury School District. Several news outlets were also present at the forum, highlighting the importance of this these issues not just to the local area but to all of Long Island.

Many had concerns about the President’s executive orders, including ones concerning travel and documentation. One mother, an asylum seeker from East Africa, expressed concerns about endangering her children if her status changes, or if she takes them to get state IDs at the DMV. Finkelstein reassured her that, “[The government] cannot retroactively impose a new law and make somebody who is here legally suddenly undocumented. That’s not going to happen.” A Muslim woman brought up rumors she heard about issues concerning traveling within the United States, though there are no restrictions on traveling internally at this time.

For those worried about ICE raids or the police inquiring about their documentation status, the various members of the panel with legal experience told attendees to demand legal representation and to say nothing else. Our executive director Maryann Sinclair Slutsky addressed several concerned people by discussing accompaniment strategies and informing them of places where they are protected from ICE: “There are safe spaces where ICE is not allowed to come – they are schools, houses of worships, and hospitals. These are places that people can go and feel safe.”

There were also Know Your Rights cards in both English and Spanish available for those who wanted more concrete strategies. Community leaders took to the mic to share resources like hotline numbers and information on local institutions, including the new Hofstra Deportation Defense clinic. New York Civil Liberties Union Nassau County Chapter Director Susan Gottehrer even addressed the issue of comforting children afraid of raids: “I think it’s important that we tell our children that there are lots of grown-ups who are working on their behalf to stand between them and danger, [as well as between] their parents and danger.”

To see the forum in its entirety, watch our live stream below: