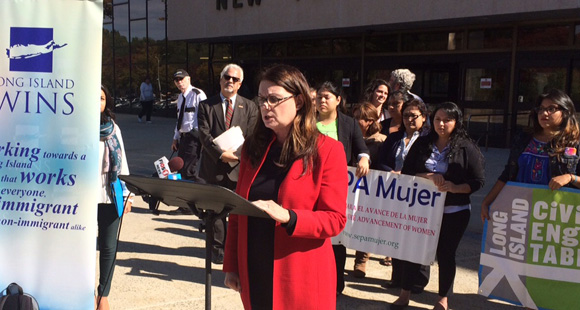 Long Island Wins joined its ally organizations during a press conference on Wednesday, to express concerns regarding a bill recently introduced in the New York State Senate that targets the immigrant community and the undocumented.

Advocates and immigrants are especially concerned because the legislation will erode long time efforts and progress made to improve relationships between local law enforcement and the immigrant community on Long Island.

In the past, law enforcement jurisdictions across the country, as requested by the Immigration Customs Enforcement agency (ICE), participated in a federal immigration program called Secure Communities, which held and detained undocumented immigrants, without a warrant, beyond normal detention time.

That collaboration between police and ICE created a sense of fear in the immigrant community. In the last decade immigrants on Long Island, especially in Suffolk, were fearful to report crimes to police as they related police precincts with ICE.

“This bill brings us right back to the early 2000s when Suffolk County immigrants lived in a climate of fear as a result of anti-immigrant legislations . . . This kind of legislation empowers people who are not of good faith to act on the divisiveness of this bill with violence towards immigrants as we saw in the 2000s,” said Maryann Slutsky, Executive Director from Long Island Wins during the press conference. “Immigrants and the advocacy community have made important progress over the last five years or more working with Suffolk County law enforcement to create and improve relations.”

Just a year ago, Suffolk County and Nassau County adopted new policies concerning the detention of undocumented immigrants. The sheriff departments in both counties, decided to stop ICE’s request in the detention of undocumented immigrants for more time than required, unless a warrant is presented. This is because Federal Courts in other States concluded that local law enforcement is not obligated to comply with that request.

The Bill (S6032), which was introduced by New York State Senator Tom Croci, a representative from Long Island, looks to prohibit sheriff departments around the state, municipal police departments, as well as district attorneys’ offices, to limit collaboration with ICE.

But as explained in the press conference, ICE’s request -detaining and holding undocumented immigrants without a warrant and beyond normal detention time- was unconstitutional and law enforcement agencies were never required to comply with it.

“The detainers requests that ICE issues are not judicial ones, their cases are not reviewed by a judge, they are simple administrative requests to hold someone while ICE decides if they would like to pick them up or further detain them in a federal facility,” according to Jason Starr, Nassau Chapter Director from the New York Civil Liberties Union. “They never require, it was always a request . . . It has never had the authority of a judicial warrant, it has always been unconstitutional,” he added.

“Anything that the State tries to do with respect to passing this bill, that will require a local law enforcement agency to hold someone just because ICE requested is a direct violation to the Constitution. That has been determined in many federal courts across the country,” Starr said.

After the press conference, Rodman Serrano, 21, a registered voter and a constituent from Brentwood, part of Senator Croci’s district, along with several advocates tried to deliver a letter of disapproval signed by 12 community organizations, asking the Senator to withdraw his bill. But the Senator refused to accept the letter in person. Instead, a staff member from Senator Croci’s office suggested Serrano and the advocates make an appointment by phone to meet with the Senator.

“I wanted to speak with the Senator in person and give them an important letter saying that I don’t agree with his bill, but I was not able to speak with him for even a minute because he is busy with other people,” said Serrano. “I am angry because I think this is inappropriate.”