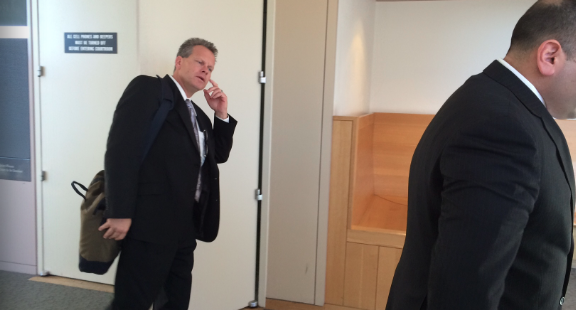 Long Island advocates are calling on the U.S. Department of Justice to investigate the Suffolk County Police Department (“SCPD”) after jurors found SCPD Sergeant Scott Greene not guilty on most of the charges related to targeting Latino drivers and robbing their money. Many advocates are now calling for the DOJ to take control over Suffolk’s police force.

Greene had been charged with 21 counts in connection with six of the seven victims.

Greene was found not guilty of all crimes relating to four victims and found guilty of petit larceny, official misconduct and grand larceny in the fourth degree in the case of several other victims.
“The verdict is another chilling reminder of a broken relationship between the Suffolk County Police Department and the Latino community,” said Juan Cartagena, president and General Counsel, LatinoJustice PRLDEF. “For too long Latinos in Suffolk County have come under attack by police. This decision is simply endemic of the problems this police department – and this community – has had with Latinos for years. It’s time for the DOJ to step in and stop this continuous pattern of racial abuse.”

He cited the recent arrest of Suffolk County’s Police Chief, James Burke, as further evidence of the need for DOJ to step in.

Since an undercover sting operation caught one of the robberies on tape, Sgt. Greene has admitted he robbed one of the motorists, which is a misdemeanor that could lead to only one year in jail.  But Sgt. Greene said he never targeted Hispanics and isn’t guilty of several counts of larceny as a hate crime. All of the seven victims who testified during the trial were Latinos, that is not counting the others who were too scared to come forward.

The SCPD has long exhibited the very characteristics that the United States Department of Justice found to be symptomatic of racially targeted predatory policing in Ferguson and elsewhere in the country. Because of recent evidence of racial profiling and other abuses of Latinos by the SCPD, LatinoJustice PRLDEF requested that the DOJ investigate SCPD for crimes against Latinos in November, 2015.

In 2013, the Department of Justice forced the Suffolk County Police Department (SCPD) to institute new policies to ensure nondiscrimination in providing services to the Latino community. In late 2015, the department’s ex-police chief was indicted for beating a man and trying to cover it up, while the SCPD Commissioner recently resigned.

“This case is only one of the many in which communities of color are targeted and affected,” said Alejandra Sorto, Organizer for the Long Island Civic Engagement Table (LICET). ”It’s the local authorities’ duty to protect and ensure our communities’ rights as residents of Long Island. We must continue to engage in meaningful dialogue around police accountability and demand that those in decision-making positions respond effectively to ensure justice for immigrant communities.”

Long Island United for Police Reform, a policy group made up of Long Island advocates for police reform, has been pushing the police department to make changes.
Make the Road New York Board Member and Brentwood resident, Frank Sprouse-Guzman said:

“It’s a sad day for all Long Islanders who want to believe in justice and trust in our judicial system to uphold it. Just like in Staten Island and Texas a police officer and the Department were not held accountable for targeted and bias attacks on Latino and communities of color. We are tired of this and will continue to stand up and organize to stop the police from getting away with attacking us and failing to protect us with impunity. We call on the new Deputy Commissioner Tim Sini and our County Executive Steve Bellone to take strong actions to demonstrate their commitment to ensuring police abuse is not be tolerated within the Suffolk County Police Department and towards working with us in creating measures that will build trust between our communities and the police.”

Martha Maffei Executive Director of SEPA Mujer said, “We must keep responding to the needs of our community and making sure that justice is served. The Latino Immigrant community has faced racial discrimination for years and this has to end now! The police must serve and protect all its residents regardless of race or ethnicity.”

Pat Young, Program Director, CARECEN Brentwood said, “The Suffolk Police Department’s performance over the last two decades has alienated many in the immigrant community who see the police as antagonistic to their interests instead of protective of them. Every level of the department must be mobilized to win the trust of the country’s most vulnerable population.”

LatinoJustice PRLDEF represents 21 Latinos in Long Island who allege that multiple officers in the SCPD systematically targeted them and other Latinos for unfounded, race-based stops after which they were either robbed or given unjustified traffic citations. They also allege that the SCPD needlessly permitted this practice to continue within its ranks for 10 years, a crime spree that left local Latinos too afraid to drive their cars, leave their homes or interact with the police.

The federal civil class action lawsuit came after Sgt. Greene was arrested following an undercover sting operation at which point Make the Road New York and LatinoJustice PRLDEF soon learned of dozens of victims who were too afraid, or thought it pointless, to complain about this widespread police criminality. Typically, one or more of the officers involved would get ahold of, in clear violation or police rules, a victim’s wallet and then return it a few minutes later with one or two hundred dollars missing.

Attorneys from LatinoJuistice PRLDEF and the law firm of Shearman & Sterling LLP are representing the plaintiffs.

All of the organizations who are quoted in this press release are members of Long Island United for Police Reform.