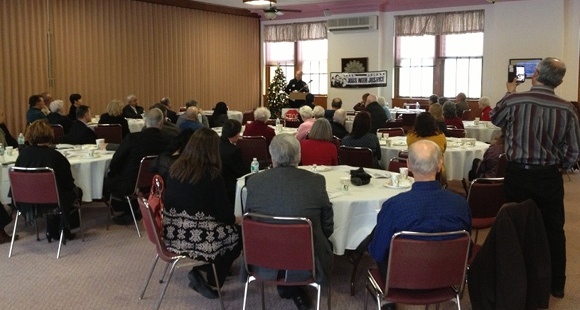 It’s fitting that as the world mourns the death of President Nelson Mandela, one of history’s greatest champions for human rights, that we are also commemorating the 65th anniversary of the adoption of the United Nations’ Universal Declaration of Human Rights.

The Universal Declaration of Human Rights aimed to form a basis for human rights all over the world and represented a significant change of direction from events during World War II and the continuing colonialism that was rife in the world at the time.

Long Islanders celebrated this historic day by gathering at the Sisters of St. Joseph in Brentwood for the 2nd Annual Human Rights Day Prayer Brunch, hosted by Long Island Jobs with Justice.

This year’s event brought attention to both the local and international causes and effects of immigration, and also reflected on the importance of the Universal Declaration of Human Rights. Participants called on Rep. Peter King to show his continued support for immigration reform in the coming year.

“Today, as we celebrate the anniversary of the Universal Declaration of Human Rights, we also recognize that 65 years after its adoption we are still fighting to ensure and protect these very same rights. We call on Congress to move forward into 2014 and pass a comprehensive immigration reform bill that takes into account the inherent dignity and worth of every human being,” said Anita Halasz, Executive Director of Long Island Jobs with Justice.

Long Island Jobs with Justice also presented its Human Rights Award to Sister Margaret Smyth, head of the North Fork Hispanic Apostolate, for her charitable and advocacy work on behalf of undocumented immigrants and her work for comprehensive immigration reform. 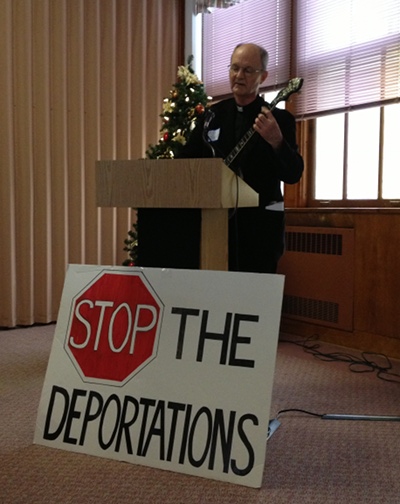 Father Bill Brisotti of Our Lady of the Miraculous Medal performing a song to call for immigrant rights.