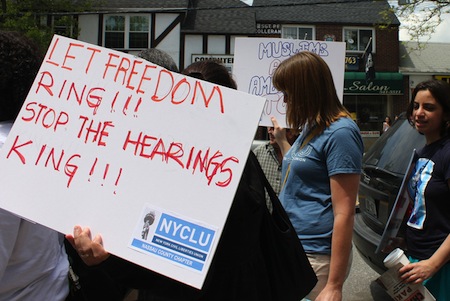 On May 21, members of The First Unitarian Church of Brooklyn and the Long Island Neighbors for American Values coalition gathered outside Congressman Peter King’s office in Massapequa Park to protest against the Muslim radicalization hearings sponsored by King in the House of Representatives.

The objective was to promote tolerance between people from different backgrounds, religions, and beliefs. Members from the American Values coalition highlighted that one of the most characteristic things of the United States is its richness in diversity and invited Americans to embrace it instead of fighting it.

The protesters chanted against discrimination and carried banners and posters showing their support to the Muslim community.

Right next to them, separated by a group of police officers, a group of King’s supporters also rallied, but in favor of the hearings.

In the end, despite the tensions between both groups, there were no incidents.

Here are some photos from the protest: