The message was clear, even without the chants, posters, and t-shirts on display Wednesday in front of a Chase branch bank in Hempstead:

Don’t cut government programs like Medicare while large financial institutions continue to pad the pockets of the most wealthy Americans.

“We know this is the majority sentiment in this country, in this state, and on Long Island,” said Pearl Granat, a Hicksville resident and a vice-president at 1199 SEIU United Healthcare Workers East. “And we’re passionate about it.” 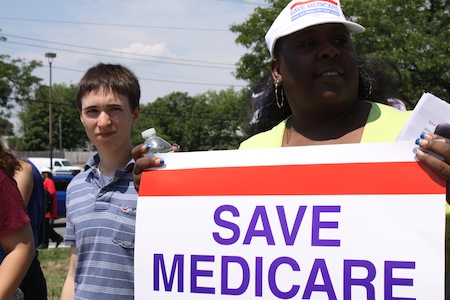 Roughly 75 people from a mix of backgrounds and organizations gathered near Hempstead Turnpike at noon to make their voices heard while passing cars and trucks honked their horns in support. Dozens of seniors were in attendance, fearing a loss of benefits, and the rally was billed as a senior “knit-in,” with yarn and needles in tow.

National news spurred the local demonstration: The recent debt agreement in Washington averted a default crisis, but means that cuts to government programs may be on the horizon, with Social Security, Medicare, and Medicaid all vulnerable to budget slashing. Speaking in the White House Rose Garden yesterday, President Obama stressed the need to take a balanced approach to federal cuts.

“We can’t balance the budget on the backs of the very people who have borne the brunt of this recession,” he said yesterday. “Everyone’s going to have to chip in.”

Republicans in Congress will certainly push for reductions in government programs, however, and that threat motivated groups like United NY, Make the Road New York, and New York Communities for Change to join the rally Wednesday and demand that big banks be taxed to help balance the federal budget. Simultaneous rallies took place in Midtown Manhattan, the Bronx, and Brooklyn. 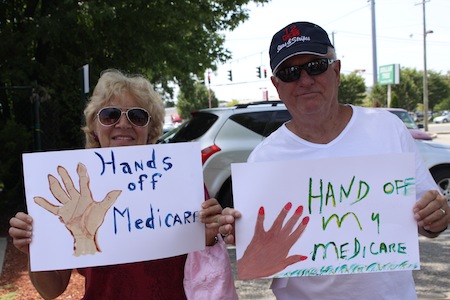 The cuts will also affect immigrant communities on Long Island, according to Luis Valenzuela, executive director of the Long Island Immigrant Alliance and a Long Island Wins board member.

“Immigrants have suffered as a result of corporate greed,” he said. “The foreclosure rate among immigrants is quite significant, staggering, in fact.”

People in attendance had personal stories about the importance of government programs. Saul Lebron, a 65-year-old retired corrections officer who lives in Hempstead, said that his wife uses Medicare.

“She suffers from high blood pressure and diabetes, so she depends on Medicare,” he said. “And I’m paying higher and higher each month.” 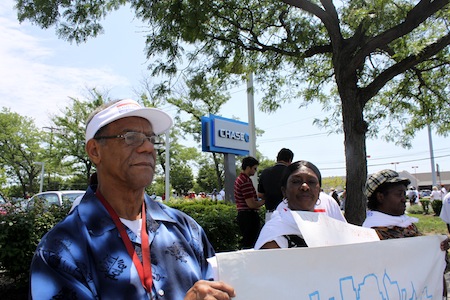 Saul Lebron in Hempstead on Wednesday.

Here’s a slideshow of photos from the rally: