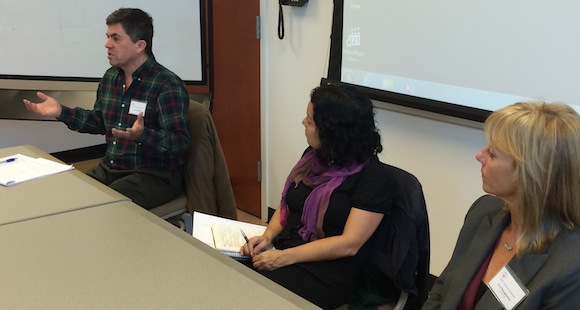 “It’s simple justice that those who contribute their tax dollars through the treasury to public resources should not be excluded from the very institutions that their tax dollars are supporting,” said Nisha Agarwal, the New York City commissioner of immigrant affairs at Touro College in Central Islip on Friday.

Agarwal was quoting John F. Kennedy in his response to the proposal of Title VI of the Civil Rights Act of 1964, which prohibits discrimination on the basis of race, color, and national origin and one of several key pieces of legislation that enable the fight for language access for all new Americans. The quote was part of her keynote speech at the third annual Long Island Language Access Coalition (LILAC) Conference.

LILAC is headed by Cheryl Keshner of the Empire Justice Center, who has been at the forefront of the fight for language access for several years now.

The event was a valuable opportunity for all those who work with and fight for LEP Long Islanders to discuss what’s working, what’s not working, and to find new ways to provide access to services that all Long Islanders deserve, regardless of language proficiency.

The conference was dedicated to the memory of Marcelo Lucero, the Ecuadorian immigrant who was killed in a 2008 hate crime in Suffolk County.

Workshops covered a wide range of topics including issues relating language access to education, mental health services, and social services for the elderly and disabled. It also addressed challenges faced by LEP immigrants in the correctional system, as well as environmental racism, and the rights of immigrant workers.

In the opening session, Luis Montes, assistant deputy Suffolk County executive, updated attendees about the county’s efforts to institute a comprehensive language access program. He said the county has already translated 2,300 documents into the six most commonly spoken languages other than English—Italian, Polish, Spanish, traditional Chinese, Portuguese, and Haitian-Creole. However, there are 30,000 documents that must be translated in order to fully comply with the executive order signed by County Executive Steve Bellone in 2012.

Despite fiscal constraints, he said, “We are making progress.”

Daniel Altschuler, Long Island coordinator for Make the Road NY, recapped the struggle to get Nassau County to follow suit with implementing its own language access programs. “We have to be diligent” and hold elected officials accountable, he said. He advised keeping residents who have suffered from the lack of language access at the forefront when dealing with the county.

One key workshop, which featured Long Island Wins’ Executive Director Maryann Sinclair Slutsky as a speaker, offered the plain facts about Long Island’s newly arrived children from Central America, and outlined who these children are, what they need, and what their legal rights are.

“These are children very much like our own children,” said Slutsky.

She discussed the many factors that have driven the children to the U.S., primarily the need to escape harm in their home countries and the hope of reuniting with family who have been living in the U.S. for years. According the most recent data from the Office of Refugee Resettlement, Long Island received 2,600 children since the start of the year—the third largest amount of any region in the U.S. She also talked about the negative reactions some have had to the children’s arrivals, as well as the many organizations that have stepped up to support the children and their families.

She was followed by Jason Starr, Nassau County chapter director for New York Civil Liberties Union. Starr discussed the many legal challenges the children have faced, particularly as it pertains to their education.

Starr was sharply critical of schools that have erected illegal barriers to their enrollment, but was quick to note that not everyone who works with the families on the enrollment process is to blame—sometimes, he says, rules are put in place by “xenophonic people who find their way into the registrar or superintendent’s office” of a given district.

Concluding the session was Sister Margaret Smyth of North Fork Spanish Apostolate in Riverhead, who offered her experience working with some 200 of the children and their families. She described the children as hungry, hurting, and scared. “I’ve had 17-year-olds who cuddled up next to me because they were looking for that human touch,” she said.

She also outlined some of the many needs these children and their families have now that they are here in the U.S., including legal assistance. “People find it hard to articulate why they came,” she said. “They find it hard to talk about.”

Language access is a critical issue for immigrant workers as well, as one session revealed. Nadia Marin Molina of NDLON (National Day Laborer Organizing Network) talked about the rampant wage theft that many day laborers and other immigrant workers are faced with. She said the issue of language access needs to be looked at “more broadly,” insisting, “we need to figure out better ways of communicating people’s rights.”

Teodoro Talbot of the New York Committee on Occupational Safety and Health said language access is a safety issue. Many LEP workers don’t know their rights regarding the use of personal protective equipment (PPE) in hazardous work environments, he said. Talbot cited numerous examples of workers being denied PPE or being ostracized for trying to use their own. He personally was once told by an employer that he was being a “bad example” by employing the use of such equipment.

During a lunch break between sessions, attendees heard from Manuel Bonilla-Gonzalez, an immigrant student and one of the newly arrive children. Speaking through a translator, he said that he is very happy to have reunited with his family here in the U.S. He now aspires to be a doctor. “Having come here I feel that I have grown, and now all I need to do is learn to speak the language,” he said.

Federal law guarantees “meaningful access” to government services for all residents. Conferences like these are important because they remind elected officials and the community that we must have a viable language access plan in place for the safety and well being of LEP Long Islanders. A fully implemented comprehensive and effective language access plan will improve the health and welfare of Long Island’s immigrant communities as well as all those who call Long Island home.