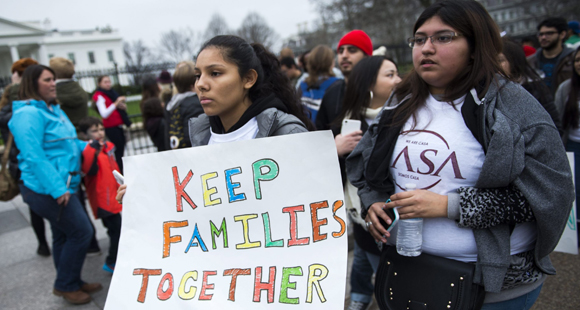 The Southern Poverty Law Center (SPLC) filed a lawsuit this week seeking information on ICE raids in January that targeted Central American mothers and children in four states. The raids set off a nationwide panic in Latino neighborhoods around the country, including here on Long Island.

The SPLC originally sought the information through a Freedom of Information request filed on January 7, 2016. According to the complaint filed with the Federal District Court, the Department of Homeland Security has not turned over any documents regarding the raids.

The SPLC told the court that, “these raids have raised serious concerns about potential constitutional violations. Upon information and belief, in several instances, ICE agents entered homes without obtaining lawful and voluntary consent during these immigration raids.” The SPLC says that “ICE agents allegedly used deception to gain entry into the homes, stating that they were police officers looking for a criminal suspect and showing residents a photo of an African American man.” In other cases, the SPLC says, “agents allegedly stated that they were only taking the immigrants into custody for a short time to examine the women’s electronic ankle shackles.”

The SPLC complaint alleges that ICE entered homes of immigrants without either permission or the necessary warrants. According to the complaint, when ICE agents were “asked for copies of warrants or orders to enter a home, ICE agents ignored the requests, threatened residents, or ordered them to be quiet.”

According to the complaint, all but a dozen of the families caught up in the raids have already been deported. “The families that have been able to remain in the United States had insisted on speaking to a lawyer while detained, allowing their counsel to file petitions for stays of deportation with the Board of Immigration Appeals, all of which were uniformly granted,” according to the SPLC.

The public is entitled to know what the motives were behind the launching of these raids directed at immigrant women and children who fled death in their homelands. These raids created widespread panic and put people’s live in danger. The Department of Homeland Security needs to turn over the documents behind this scandal.